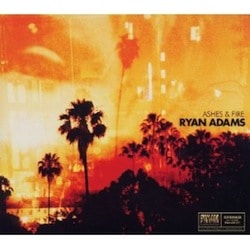 After a very impressive start to his solo career, with the double-whammy of Heartbreaker and Gold, Ryan Adams’ career has been something of a stop-start affair. There’s been highs (the Love Is Hell sessions, the Cold Roses-era Cardinals), lows (squabbles with record companies, trips in and out of rehab) and a serious issue with quality control – for every starkly beautiful record like 29, there was an album of MOR plodders like Easy Tiger).

The man’s sheer productivity (Ashes & Fire is his 13th album in just 11 years) is to be admired, of course, but to paraphrase Marlon Brando in On The Waterfront – he could have been a contender. Instead of a mildly respected cult singer-songwriter. Which is what he is.

However, there seems to be an air of a fresh start around Ashes & Fire. Back on his own following the dissolution of The Cardinals, the new album sees him teaming up with Glyn Johns (whose son, Ethan, produced Adams’ finest solo records), and there’s an air of calmness and low-key contentment to the majority of the songs here. It’s the sound of a former hellraiser, now settled down and married and looking towards the next stage of his career.

And surprisingly for one who could narrate heartbreak, pain, and chaos so well, it’s a mood that thoroughly suits him. Ashes & Fire is mostly an acoustic record, and even when the electric guitars are unpacked for tracks like Chains Of Love, there’s a subtlety and restraint that’s been all too absent from Adams’ past.

Adams has also surrounded himself with a good team on Ashes & Fire – alongside Johns, there’s Benmont Tench on keyboards, while Norah Jones continues her regular collaborations on three songs. Often unfairly written off as “supermarket jazz”, Jones’ voice blends perfectly with Adams on the standout Come Home. She also appears with Adams’ wife Mandy Moore on the affecting Save Me, possibly the most personal song that Adams has ever recorded.

In fact, lyrically Adams seems to have surpassed himself here. Lucky Now is almost painfully poignant, both reflecting on his own past troubles and paying tribute to the late Cardinals guitarist Chris Feinstein. There’s also plenty of undisguised love songs to Moore, such as I Love You But I Don’t Know What To Say and Come Home, but none of them are sappy or overtly sentimental.

Whether it be the opener Dirty Rain, with its gently strummed acoustic guitar or the slowly building anthem Invisible Riverside, it’s clear that Adams has benefited from an editor at last. None of the songs sound out of place, there’s no self-indulgent noodling, and it genuinely feels like his most complete record since 29.

It may put people off who were more attracted to Adams’ more tortured side, but Ashes & Fire makes for a compelling reboot for a man who could, once more, become a contender.