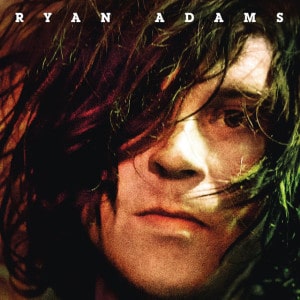 It seems a long time ago now that more than a few people were a little concerned about Ryan Adams. As he now heads towards a 40th birthday that some doubted he’d ever see, it’s easy to forget that less than 10 years ago he was a bit of a car crash, becoming so stringed out on booze and drugs that he ended up breaking his wrist when falling offstage in Liverpool, dating a succession of unlikely starlets and pretty much jettisoning the idea of quality control as he seemingly embarked on a personal crusade to release as many albums as humanly possible.

Since then, Adams has settled down and this self-titled album – his 14th in as many years – comes a whole three years after the creative rebirth of Ashes & Fire, his longest ever break between albums. And like Ashes & Fire, this newest release harks back to the glory days of Heartbreaker and Gold, albeit remoulded to suit a new ‘classic rock’ template.

For while Ashes & Fire concentrated on the quiet, acoustic side of Adams, the self-titled album lets loose the electric guitars. A ringing riff reminiscent of Keith Richards at his best opens up Gimme Something Good, setting up a bluesy, melancholic feel that’s present throughout the album. For, what’s most revealing about the album is that – in contrast to Ashes & Fire’s air of contentment – there’s a sadness and sense of regret running through almost every track. While it never quite scales the bleak heights of Heartbreaker or Love Is Hell, there certainly seems an air of unease running underneath the radio-friendly sheen.

For example, there’s a longing to the way Adams belts out the chorus of Gimme Something Good, a longing that’s even more pronounced in Kim, a strikingly emotive track (featuring a certain Johnny Depp demonstrating some impressive guitar work) which sees Adams retracing streets where he used to walk with a former lover. Adams’ voice often catches with emotion, a trick he repeats throughout the album to startling effect – just listen to the way he mournfully sings “I just don’t love you anymore” on Am I Safe.

The lyrics throughout are pretty bleak: Trouble talks of smashing mirrors because “seven years bad luck is better than none”, while Shadows talks of a “cold front rolls in, like a black balloon and it sinks into your soul”. Even Stay With Me, on the surface a simple declaration of love, is delivered like a last-ditch plea to a departing lover.

The album’s best track is probably My Wrecking Ball, a wonderful Heartbreaker-esque acoustic ballad featuring just Adams on an acoustic guitar. It’s simple, effective and like many of Adams’ stripped-down material, almost impossibly moving. On the other side of the sonic spectrum is Shadows, which dissolves into a weirdly discordant cacophony, reflecting Adams’ lyrics concerns about “in my head, that field of razor wire comes a little closer”. In many ways, the whole album is the flipside to Ashes & Fire, with cosy domesticity replaced by anxiety, unease and uncertainty.

Yet Adams’ great skill is in delivering this seemingly depressing material with just the right amount of passion and poise – the sort that makes you want to keep returning to the record. Like much of his best work, it’s a slow-burner of an album: at first listen, it sounds a pretty decent radio-friendly record, but it’s only on repeated plays that the full emotional scale which Adams is displaying becomes clear. He may be no longer toying with self-destruction, but he’s still capable of producing music that can rip your heart in two.