S Carey – All We Grow 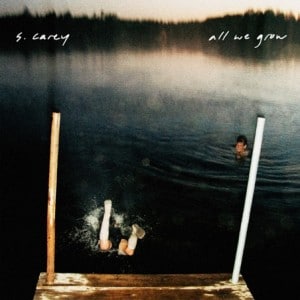 A solo album by a drummer may well strike a fair degree of fear into your heart. Endless drum solos? Earnest, heavily percussive grooves? The fact that, for most people, the very phrase ‘singing drummer’ still conjures up images of Phil Collins?

Luckily, the last couple of years has seen that particular cliche consigned to history. J Tillman of Fleet Foxes has built up a steady, if low-key, side project with his albums of wistful folk music, while Phil Selway recently took a break from Radiohead to release his first solo album, Familial.

Hot on their heels comes Sean Carey, known for these purposes simply as S Carey. As the drummer touring with Bon Iver, (he wasn’t involved in the recording of the album) you’d probably expect a languid, wistful album full of downbeat folky tunes – and that’s exactly what you get.

Bon Iver comparisons will abound, but this feels more like a companion piece to For Emma, Forever Ago rather than a pale imitation. Carey’s voice doesn’t carry pain and hurt as effectively as Justin Vernon’s, but the songs here are more reflective and pastoral than on Vernon’s debut. This is the calm after the storm, if you like.

Although there are some impressive percussive arrangements here – especially on In The Dirt and on Action, the loudest track here – most of the songs here are built around piano. We Fell is simply spellbinding, Carey’s mournful vocals interplaying wonderfully with the rolling keyboard chords. It’s the sort of song to listen to late at night, on headphones, while you drift off to another place.

As well as Bon Iver, there are elements of Sigur Rós, Shearwater, and most obviously on the acoustic guitar led Mothers, José González. Elsewhere, the compelling In The Dirt is reminiscent of Seven Swans-era Sufjan Stevens, yet Carey uses these names as influences and reference points, rather than bland retreads.

Admittedly, it’s not the most uptempo of albums. Opening track Move may be the most inappropriately titled song of the year, while the brief instrumental Rothko Fields is the only track where interest threatens to wane. Mostly though, it’s impossible not to feel a sense of awe at Carey’s craftsmanship – especially on the beautiful In The Stream, which melds woodwind instruments, insistent piano and a plaintive backing vocal to gorgeous effect.

The brooding Broken brings things to an appropriately stately closer, by which point you’re convinced you’re listening to one of the albums of the year. All We Grow is not an album for instant gratification, nor is it an album to relegate to background music. Rather, this is a record to study and indulge yourself in – it deserves every bit of your attention. All We Grow should see see Sean Carey step out of his bandmate’s shadow and receive similar acclaim.