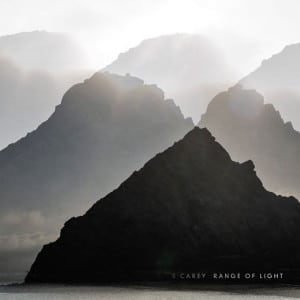 Talk of S Carey must mention his connection with Bon Iver. S Carey, or plain old Sean, was part of Justin Vernon’s band as a classically trained percussionist (with a love of jazz drumming) and merged his own harmonies with the singer’s to flesh out and create a spectral density to Vernon’s fragile debut.

Similar in spirit to the equally spare and meditative folk-post-rock of Sufjan Stevens and Fleet Foxes, Casey’s work bears influences of sepia-tinged tight-knit harmonies from The Beach Boys to Crosby, Stills, Nash and Young, but takes these forces into the great beyond and the realm of the personal, reflective and meditative ruminations on exterior landscape mapping the interior.

Range Of Light sees Carey expanding his debut All We Grow’s insular atmosphere to include input from his band (and the omnipresent Vernon as studio owner and encouraging friend). This is an album looking outward with themes of spirituality and fatherhood, memories and locations, both real and imagined. It is without sharp focus, but offers enough clues to link them together, like a vapour paperchain.

Taking its title from the name the 19th century naturalist John Muir gave to the Sierra Nevada, Range Of Light reflects the light and shade and love of landscape inspiring Carey. Opposites are fundamental in his work as he builds banks of sound that are at once monumental and intimate, solid but shifting, complex yet simple. Carey’s voice hovers in the higher scale of banks of falsetto harmonies to become an abstract element in itself, one which compliments the trace elements of instrumentation reminiscent of later period Talk Talk, albeit offset by banjo, especially on Glass/Film.

Washes of sound are layered like the composition of a painting, where every detail informs the whole but can also be taken on board in isolation. The spare piano lurking around Fire-Scene’s reflective “all I want is honesty” central motif comes over like some acoustic and well-mannered Radiohead. Even the slight Radiant has a concise beauty in its deployment of slide guitar and piano, despite not offering anything in the way of discernible lyrics. Elsewhere, Alpenglow does not, despite the title, eschew the benefits of a muesli-based breakfast treat, but rather the hope of redemption through love, set to gently pulsing piano/guitar that veers close to Sigur Rós territory of glacial peaks and nameless yearning.

But it is not all exclusively peaceful, blissed out reverie, as the restless skittering percussion of Creaking proves. It blossoms underneath Carey’s sparse vocal to offer some tethering to the drowsy clouds of sound. The circular rhythms so beloved of Jaki Leibzeit (Can) are manifest on Crown The Pines, atop which a swarm of violins hovers. There’s even an alpine sounding harp that almost threatens to turn into Edelweiss from The Sound Of Music before Vernon’s now-familiar ghostly backing tips it out of whimsy into something more complex, with a shifted rhythm and background to stir the mood into something more restless.

Lyrically Carey tends towards the opaque and impressionistic where the spaces between the words let them hang to make their impact. Imagery tends to be of the vague, disconcerted personal ruminating variety with nothing to stick or stand out, but this is no bad thing, as repeated listenings make for appreciation of the voice as another ‘wash’ amidst the palette of instrumentation.

Range Of Light seems beamed in from another age, another space with no chest-beating or ego, a refreshing travelogue from a seasoned musician in awe of nature and using his skills in composing to make something thst holds a mirror up to the world and our small place in it. S Carey’s work may not have the same iconic impact of Bon Iver but through it he has created an album which rewards repeated visits.