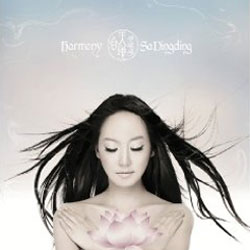 Nobody has quite the same methods of self-expression as Sa Dingding. The 26-year-old doyenne of Chinese electronica became one of Asia’s most in-demand singers after the release of her 2008 major label debut album Alive.

Born and raised into a nomadic existence in Inner Mongolia, this �ber-talented singer-songwriter not only plays a plethora of traditional instruments but also speaks Monglian, Mandarin, Tibetan, Lagu, English and Sanskrit. Throw into this a flair for costume design that could put Vivienne Westwood to shame and you have a lady who should, given a chance, be impossible to ignore.

Listening to Alive’s follow-up Harmony it’s easy to see why labels such as ‘the Chinese Bj�rk‘ have been used to describe her, but perhaps the best comparison would be with French duo Deep Forest. The combination of an exotic vibe mixed with polished electronica and a hint of je ne sais quoi gives an end result that’s both beguiling and compelling.

It’s therefore easy to understand why Sa Dingding won a BBC Radio 3 World Music Award for her last album, the plaudit securing her stage time both at Womad and at the BBC Proms. All this has helped attract producer Marius de Vries, the man behind Bj�rk’s Debut album, and superstar DJ Paul Oakenfold.

Oakenfold works his magic on a version of the opening track and first single release Ha Ha Li Li. Its breathy vocals, pounding drums, whoops and whistles are an acoustic delight and a far cry from the saccharine banality that defines so many of the identikit popstrels that dominate the east Asian charts.

Another gem is Dingding’s first English language recording Lucky Day, which is in essence her tribute to Michael Jackson, although penned four months before his demise. With its claps-and-stomps intro leading straight into some exquisite electronica, the icing on the cake is Dingding’s accented and emotive quasi-spoken vocal.

Also worthy of repeat listens is Hua, a lilting melody of such heart-stopping loveliness it’s clearly missing its calling as part of a film soundtrack.

There’s a sense of almost tongue-in-cheek naivety to several of these tracks. Weaving in the elements of China’s minority cultures, they play on the listener’s preconceptions of lifestyles they can only have a fleeting familiarity with. That said, it manages to do this without sounding the least bit contrived or staged.

One of Sa Dingding’s stated missions is to reach as wide an audience as possible, and she certainly deserves to with this offering. If she can make it out of the world music section and into the mainstream with what is ultimately a wonderfully inventive pop album, there are hints of a real staying power. Be prepared for another Chinese export to take an industry by storm.