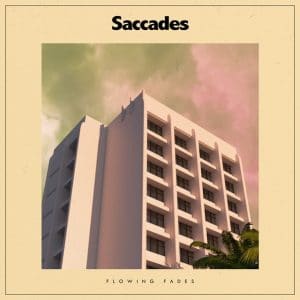 Heavy lidded and hazy, infused with gently entertaining Balearic energies, the second release under the Saccades handle by The KVB’s Nicholas Wood continues to arouse recollections of golden hours spent on the balconies of sandblasted all inclusive Mediterranean mega resorts as an intoxicated youth, knocking back illicit watered down pina coladas and flirting with the obligatory tennis and or aquarobics instructors, whilst getting down to the latest downbeat Euro disco at the tawdry discotheque in the old town. In fact the desaturated cover art even goes so far as to feature one such brutalist enclave to solidify the ennui laced sensation.

Released on the Fuzz Club label, Flowing Fades finds Wood seemingly micro dosing Klonopin such are the woozy remonstrations of Islands Past, which begrudgingly coaxes the musician out of the gloomy shadows and into the summer sun.

Recorded under lockdown in his new hometown of Manchester and equating the myopic spectatorial nature of being under virtual house arrest with the voyeuristic hubris of decompressing holidaymakers, the psych rocker earnestly singing “Lets just stare out to water / use our minds and eyes like cameras”. The sweating synths that guide On Your Mind, Like Everyday and Older Than Tomorrow bring to mind the mid ’80s romantic defeatism of some of the lesser-known continental balladeers such as Stephane Sévérac and Gary Low.

Elsewhere on Tonight We Can Expect The Same, you get some softly adorned Mazzy Star tentativeness and the heat baked warbling of Endless Spring recalls Pulp’s tonally similar Blue Girls from their 1983 debut album It. Breezy (with backing vocals from Woods’ wife and KVB associate Kat Day) does a good job of plugging into the emotional detachment of mid period New Order and Lady Blue just downright knocks off those menacing sliding strings on Serge Gainsbourg’s Melody that Arab Strap cheekily incorporated into their remix of David Holmes’ Holiday Girl (Don’t Die Just Yet).

These anxious soundtracks to adolescent drinking and mating rituals aren’t completely devoid of euphoria, as on Heat, the tempo abruptly surges like mercury in a thermometer during a heatwave. And while the temperature measurement suggests it’s not scorching enough to burn, Flowing Fades’ healthy pink glow ought to suffice for now.