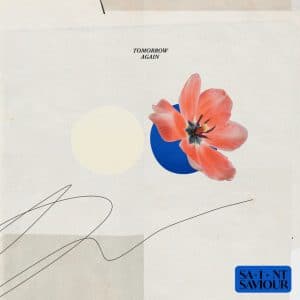 Becky Jones has been playing a waiting game. Nearly six years after In The Seams, her last album as Saint Saviour, she revisits that identity with a noticeable shift towards even more expressive and intimate forms of songwriting.

Jones has performed and recorded a wide range of pop music, from the upfront as a sometime vocalist with Groove Armada to contributions as a songwriter for HBO’s The Young Pope and the film Seahorse. Yet Saint Saviour remains a constant in her career, begun in 2010 and yielding two albums prior to Tomorrow Again. These different building blocks of her style combine to make the new work a beautifully rendered sculpture, with vivid storytelling and subtle but imaginative orchestration.

Jones’ voice dovetails seamlessly with three male guests early on in the album. Willy Mason’s consoling tones provide the ideal foil to a watery guitar line on Rock Pools, the chemistry between the two vocalists evident, while last year’s collaboration with Badly Drawn Boy, The Place I Want To Be, is more the work of a seasoned pop duo, the two finishing each other’s musical sentences. Home, featuring regular collaborator Bill Ryder-Jones, is shaded by autumnal tones, bass clarinet and muffled trumpet complementing the frank dialogue of its lead protagonists.

The storytelling elevates Jones’ writing to a higher pop music plane. The listener hangs on every word in Paris, with its vivid descriptions of how “that time in Paris, when we locked our love forever to that bridge. You think I’d find it now if I went looking – where would I begin?” Surprises are in store during Breton Stripe, its initially coy demeanour and dappled colours suddenly acquiring crunchy guitar distortion and an assertive tone. “I changed my skin again,” the singer reveals.

The instrumental touches on Tomorrow Again are lovely. A dulcitone is the first instrument on the album, providing a rocking motion for The Place I Want To Be. The viola comes to the fore with silvery tones on the gorgeous Taurus, complemented by further string-based harmonies. Multitracked vocals lift the harmonies of Paris and give the powerful electronic number For My Love a harder punch.

Here the Groove Armada associations are most evident, and the song proves the versatility of Jones’ voice, capable of singing outgoing dance anthems-in-waiting as much as it is singing alone in the confined spaces of a small bedroom.

All these elements combine to make an enchanting and captivating album that will surround its listener with warmth and empathy. Jones sings from personal experience, detailing changing moods and life events but ensuring they have a deep-rooted positivity that always comes through to the front. Each listen of Tomorrow Again will tell you more about Saint Saviour, and add further appreciation for her craft.