by Steven Johnson
published: 10 May 2013 in Album Reviews
Tweet 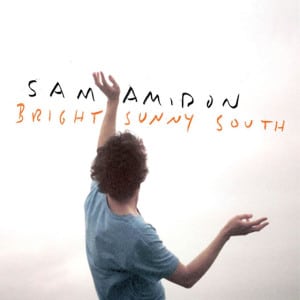 Over recent years Sam Amidon has discreetly established himself as a distinctive voice in modern folk music, releasing albums that infuse newness and freshness into the genre. His music shows him to be a respecting and informed admirer of the genre’s traditions without ever being overly deferential. Bright Sunny South is his debut for Nonesuch and its contents reinforce these points.

To the uninitiated, he may come across as simply another folk singer in a numerically expanding pool, but attentive listening proves otherwise. What sets him apart is threefold; the sheer quality of material, arrangements that show a willingness to deviate from the norm and his wonderfully rich, expressive voice. His involvement in the Bedroom Community collective is also indicative of his wider musical outlook (Icelandic electronic musician Valgeir Sigurðsson produced his last two albums and neo-classical prodigy Nico Muhly contributed string arrangements to I See The Sign, his supremely evocative 2010 release). On this album he utilises the talents of Thomas Bartlett, Shahzad Ismaily, Chris Vatalaro and Kenny Wheeler, reflecting his interest in jazz, improvisation and looser musical structures.

Bright Sunny South may not have the stark string arrangements of its predecessor but these songs are arguably drawn from a broader musical palette, mixing original compositions with covers of songs both old and new. The relatively short length of the album only serves to increase its impact.

Amidon has described the album as “a lonesome record” and the sadness and subdued beauty is most evident in the early stages. On the opening three tracks his lilting and languid voice glides over the lyrics, all shaded, curtailed pronunciation. Each encapsulates in their own way the melancholy mood that runs through the album. The softly intoned, poignant title track relays a story of a man addressing family members before leaving for war, I Wish I Wish offers more in the way of regret and longing while the downtrodden, dejected beauty of Short Life registers as the album’s blackest and bleakest moment.

His version of My Good Friend by Tim McGraw breaks the subdued mood, introducing an upbeat and comparatively optimistic dimension to the album. As the album progresses it gets musically more varied. He’s Taken My Feet invites quiet reflection before mutating into something far more penetrating, fractured drumming and jagged guitars being welded together powerfully. His cover of Mariah Carey’s Shake It Off (renamed here as Shake U Off) sees the original flattened, slowed down and recast in sorrowful fashion.

As I Roved Out meanwhile is arguably the most striking track on the album, largely down to Amidon’s liberated vocals and his unpolished, rustic banjo playing. It reflects the mild eccentricities found in his live shows whilst also managing to simultaneously sound contemporary and old-time. It’s a combination that has been present in his music from day one and Bright Sunny South proves it’s one that still reaps significant dividends.