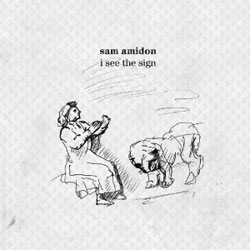 Sam Amidon is young, American, and steeped in the traditions of folk music.� The son of eminent teachers and purveyors of “storytelling and traditional dance and music”, he has picked up the baton and run with it, forming a significant part of this generation’s folk revival.� He releases his fifth album on Icelandic label Bedroom Community.

Labelmates Valgeir Sigurðsson (production) and Nico Muhly (backing and arrangements) are significant contributors, lending these songs much of their quirky, unexpected “otherness”.� Despite the ostensibly traditional nature of Amidon’s material – as shown even by a quick glance at titles like Pretty Fair Damsel – this is far from being conventional, set-in-aspic music.

Muhly’s arrangements, and the instrumentation that accompanies Amidon’s warm, earnest vocals, are key.� From the beginning, with the unexpected sharp, astringent darts of strings in How Come That Blood and its curious shuffling percussion sounds, a peculiar, particular atmosphere is created.� The strange and slightly unsettling flourishes of woodwind and violins in You Better Mind, and the skittery sounds that punctuate Way Go Lily, contrast with Johanna The Row-di’s acoustic guitar, the mellow, more harmonious backing of Pretty Fair Damsel and Climbing High Mountains. But even these never sound predictable.

Instead the songs are often gritty.� How Come That Blood and Rain And Snow are both murder ballads, the latter delivered with the tang of the blues, and a broken, cracking vocal that matches its content.��Family is often a concern, from the “blood of my own dear brother” in How Come That Blood, to Way Go Lily’s ambiguous “Gonna roll my Momma / Gonna roll my Poppa”.� Most prevalent of all are images and themes of a religious nature, perhaps to be expected in traditional songs.� Here again, though, this is anything but insipid or lily-livered pious fare.� You Better Mind warns, with a drawled yet somehow still urgent vocal that “You gotta give an account at The Judgement”, while Kedron depicts the “bloody” way in which Jesus was crucified – complete with “fainting pangs”. This is Christianity red in tooth and fang, the only exception being the uplifting positivity on Relief, all shining sun, celebrations and an “angel in the sky”.

The repetition of a phrase or a question, followed by a different answer or “pay off” in each verse, is found in How Come That Blood, Johanna The Row-di, Rain And Snow and Climbing High Mountains, again counterbalanced by the backing arrangements.� Vocally, Amidon is gifted at conveying emotion, his voice warm, believable, likeable.� It’s a flexible instrument as well; mellow and tuneful on Relief and Pretty Fair Damsel, yet aptly slurred and off-key on Way Go Lily and Kedron.� Beth Orton‘s contribution of backing vocals on many of the tracks adds yet more layers, and complements Amidon’s voice well.

Only the slightly lounge/jazz feel of I See The Sign, and Kedron’s vagueness and weak, forgettable melody feel like misfires.� For the most part, and most particularly on the really quite beautiful Pretty Fair Maiden and Relief, this is an album that will reward the listener able to put aside preconceptions and admire its clever and successful fusion of styles, genres and musical traditions.