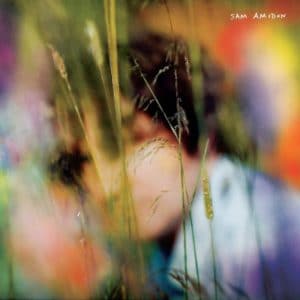 Whereas his 2017 album The Following Mountain comprised an all originals tracklist, Sam Amidon‘s new self-titled album inverts that precept by consisting entirely of covers and interpretations of folk standards. Yet rather than being the back to basics work its title might suggest, it represents a substantial advance in sound and scope from Amidon’s earlier approaches to folk material.

The wistful twang in Amidon’s vocals resembles Arthur Russell, although his musical settings now seem to be more robust than Russell’s often brittle constructions. The album opens with Maggie, a take on Little Maggie, ushered in with Amidon’s propulsive banjo and waves of crepuscular synthesisers. Its rhythmic urgency cannot help but be reminiscent of Robert Plant’s recent take on the same source material (on 2014’s Lullaby…and the Ceaseless Roar).

There is the sense that Amidon may have been influenced more generally by Plant’s approach, as his musical collaborators (including mixing engineer Leo Abrahams, Shahzad Ismaily and drummer Chris Vatalaro) are drawn from similarly diverse backgrounds, well versed in improvisation, world music, ambient and electronic music and contemporary composition.

There’s a satisfying and vigorous insistence to Amidon’s take on Pretty Polly and a rich resplendence to the textures of Spanish Merchant’s Daughter. The closing Sundown, one of a handful of tracks to feature Amidon’s partner Beth Orton, offers something more warm and homely. These contrast effectively with the sparer arrangement on a version of Harkins Frye’s Time Has Made A Change or Hallelujah (the 19th century standard rather than the Leonard Cohen song, perhaps fortunately given the stifling ubiquity of the latter). Bathed in reverb, the interpretation of Taj Mahal‘s Light Rain Blues seems deftly arranged to evoke the very sounds and sensations of rain.

Amidon may have named this album after himself because he feels it is his most definitive work to date. In that it combines songs he has inhabited convincingly with a range of arrangements that suggest an increasing versatility, his self assessment may be correct.