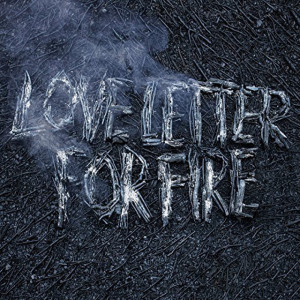 Sam Beam, better known as Iron and Wine, started off his career shortly after the turn of the millennium as a quintessential solo artist. Debut album The Creek Drank The Cradle was delightfully simple and lo-fi, performed, recorded and produced by Beam in his home studio. But as time has passed, the South Carolina native has gradually fleshed out and varied his sound, becoming a regular collaborator with other luminaries of the American alternative scene, ranging from his In The Reins mini-album alongside Arizona’s Calexico to last year’s Sing Into My Mouth, a series of covers recorded with Band Of Horses front man Ben Bridwell.

Love Letter For Fire sees Beam join forces with Californian singer-songwriter Jesca Hoop, perhaps at first glance his least obvious bedfellow yet. While Calexico and Band Of Horses share, in different ways, Beam’s deep affinity with the traditional music of their homeland, Hoop is an altogether more idiosyncratic performer, closer in spirit to fellow West Coast maverick Joanna Newsom. Beam has worked extensively with other artists, but he had never co-written songs before and this was something he was keen to explore with the right person.  After listening to Hoop’s 2011 Kismet album, he concluded he had found a kindred spirit. He got in touch and suggested that their styles could potentially dovetail perfectly.

The end result is a very satisfying, if slightly unadventurous, collection of cosily melodic country and folk tinged songs that – bar the addition of Hoop’s vocals – feels quite similar to an Iron and Wine record. The music is predominantly acoustic: gently strummed and finger picked guitar is the main instrument throughout, with shuffling percussion and the occasional piano, violin and cello the only other significant addition. However, the key ingredients are Beam and Hoop’s voices, which merge together effortlessly throughout in soft waves of loveliness.

The chemistry is evident from the start on first track proper One Way To Pray, on which the two singers alternate lines gracefully before joining together in perfect harmony. It’s a template they stick to for the following dozen songs and there’s rarely a note out of place.

Love Letter For Fire peaks around the middle with the single Every Songbird Sings. Backed by a subtle, skittering beat and a lolling guitar, we get to hear the duo’s contrasting voices at their best; Beam yearning and sweet; Hoop rich and feline. They share literate, lovelorn vignettes that are full of vivid images; “I’m a tiny heart/ that’s falling fast/like a hummingbird/like an hourglass,” proclaims Beam. It’s all beautifully realised and instantly engaging.

Bright Lights And Goodbyes is almost as good and is perhaps the closest Beam has come to the fragile immediacy of his early work in years; once again the lilting harmonies here are gorgeous. In contrast, Chalk It Up To Chi is quirky and angular, possibly the only time the record is stylistically led by Hoop rather than Beam.

Overall, there aren’t enough risks taken on Love Letter For Fire to make it a truly outstanding album; it’s a very pleasant, comfortable journey rather than an especially memorable one. But as an example of two artists gelling together it undeniably works extremely well and fans of both – Beam in particular – will find much to enjoy.