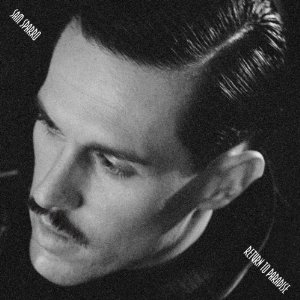 Remember Sam Sparro? If you’re pulling a quizzical face thinking the name sounds familiar, then the mention of Black & Gold will more than likely jog your memory. Sparro achieved an incredible amount success from his hugely infectious and polished single in 2008, which reached Number 2 in the UK Single Chart, going on to be featured in everything from films to the FIFA 2009 soundtrack, becoming one of those songs that you just could not escape.

It’s been four Sparro-less years since the Australian-born ’80s soul enthusiast released his debut eponymous album, which received mixed reviews while still managing to reach the heady heights of of the Top 5. Now Sparro returns with his second album, entitled Return To Paradise; but after so long away, will those who were enticed by the mawkish but admittedly catchy Black & Gold remember him at all? Or more importantly, is there any reason why anyone should care that he’s back?

Those who did fall under the spell of Black & Gold and Sparro’s subsequent average releases may well buy his new effort with the same fervor they greeted his debut with. But that doesn’t mean it’s any good. The first single, Happiness, revolves around a jaunty piano part and an underlying bassline forming a song so overwhelmingly saccharine that it will leave you wishing for Dido. It’s a recurring feeling throughout Return To Paradise.

The album opens with funky effort Paradise People, which channels all the influences Sparro often gushes about – including Chaka Khan, Kraftwerk and Soul II Soul. The smooth bassline and Sparro’s powerful vocals combine for what is a sleek affair, until the perplexing lyrics come in on the chorus (“We are the paradise people/ we are the moon and the stars/ we are the church and steeple/ sent down from Venus and Mars”). Yellow Orange Rays is an improvement; with a gripping sing-along chorus and electro twinges, it’s more in line with the more successful material of his debut LP.

Sparro’s vocals are impressive, as showcased at the start of I Wish I Never Met You over a repetitive beat and claps, but the song quickly evolves into a corny and forgettable chorus. Meanwhile, We Can Fly truly soaks itself in funky vibes and summery warmth – which, while enjoyable in bite-size chunks, is often pummeled to death by Sparro during the album. It all sounds like he’s trying too hard to impress and, in doing so, has overcompensated by throwing together a myriad of all his favourite influences.

When he isn’t complicating things, the album is better for it. Closer is about as subtle as Sparro gets, with pounding beats and a bouncing bassline dominating a disco-orientated track. The gospel choir chorus on Let The Love In once agains shows Sparro’s fondness for extravagance, while The Shallow End is surprising in its lack of direction and focus, on an album where Sparro spends far too long immersing himself in the retro sounds of times gone by.

Like Sparro himself, Return To Paradise is very sharply dressed and slick. But as was the case with a great deal of his debut album, the music all feels rather superficial and meaningless. The title track demonstrates this better than any other. It strives for a heartfelt finish with its ‘oohs’ and ‘aahs’ and hushed vocals, but in the end it just leaves a hollow feeling of emptiness. Sparro may like living in the past, but at least for now he will likely remain a one-hit wonder.