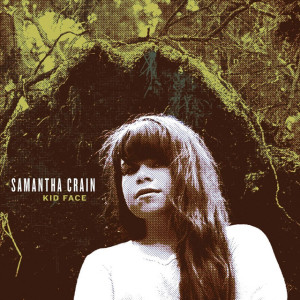 Blood On The Tracks. Sea Change. For Emma, Forever Ago. The breakup album, one of the most vaunted of all musical projects, is a misnomer. Certainly, with the aforementioned titles, there is a lingering sadness and direct focus on the hurting heart, but this description runs the risk of not giving the music its proper due.

By placing any album into a broadly defined conceptual category (“the breakup album, “the sellout album,” &C.), the nuances of each work can be lost. Or, more bluntly, Sea Change, with its lush Serge Gainsbourg-inspired orchestrations, is a far different beast than the lonely-cabin-as-studio-recorded For Emma, Forever Ago. The aural textures, the words, even the types of love and pain will vary from person to person, which brings us to the subject at hand.

Kid Face, singer-songwriter Samantha Crain’s third studio album, is a breakup album. It contains songs full of pain, disappointment, regret, self-loathing, love, and is certainly directed at someone. But it is much more than that. It is an album that recalls mid-’90s indie Nashville production waltzing with 1970s Neil Young, and while it wrestles with universal themes, it has enough specificity to assure us this is Samantha Crain’s experience. The singer-songwriter confessional album is a tricky beast: Too revealing and the singer not only risks seeming self-obsessed but unrelatable. Not personal enough and clichéd sentiment creeps in. Crain walks this tightrope admirably, helped immensely by her innate talent and skill in both words and song.

Her voice is a smoky thing- smooth and luscious at all the right parts, Norah Jones with more grit, rough country flair and a little Dolly Parton. A unique, memorable instrument. She can hold her notes, intone damnations and moan curses at any lover that crossed her the wrong way, and make them feel sorry in the process. Her lyrics are mostly direct, confrontational, and honest. On Churchill, over a bouncy, lilting finger picked melody, she sings this telling refrain: “So blame me for what I cannot finish/ my whole life I thought I was an opportunist/ but I’m not.”

The playing itself is good, and the production wisely lets the songs breathe where needed. The one piano-driven number, The Pattern Has Changed, features plucked strings and an intimate upright that sounds like its coming out of a ’60s jazz hall. For The Miner is a great old country ballad, like a long-lost outtake from Bob Dylan’s Desire Album. Smooth, heavy ’70s proto-funk bassline and bluesy piano slap create a coolly aggressive song. If used in a movie, this is the part where Clint Eastwood rides into town with shots of concerned townspeople.

Taught To Lie, with its gunshot drums and bluesy, ragged house band, improves upon Horse With No Name without trying. While the title track Kid Face doesn’t grab at first, it grows with repeated listening. Somewhere All the Time is Crain at her most jovial, and contains drumming that, strangely enough, evokes Weezer’s hit Beverly Hills.

The album ends on a high note with We’ve Been Found, with beautiful lines like “I’m not mad, I’m conflicted/ you’re not bad, you were lifted from yourself with your land like heart/ and I’m your clone, that’s what makes it hard.” After discussing the demons, the fields, all the metaphors we, as humans, use to cloak such simple rushes of emotion, she finally explains how the relationship became doomed with the final four words: “We dropped our guard.” Simply put, by the end of the album, so has the listener, and what could just be another run through a well-worn genre becomes an album that is worth a place in any serious library.