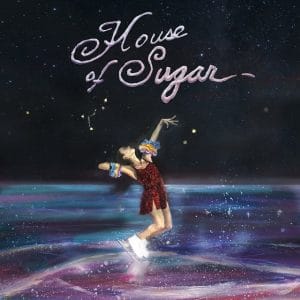 Alex G’s follow up to Rocket feels as if it has been quite a while in coming. Alex Giannascoli (Alex G) is nothing if not prolific, and whilst two years is not an age to wait for new material, there was a time when his gestation period was far shorter. Still, Giannascoli has been busy getting to grips with new technology (not that he really needs it, his lo-fi approach is part of his charm). A new laptop bought with it a new version of Garageband and with this album, he’s been working with a new microphone for the first time (his faithful Samson has been retired for the time being). Obviously it takes time to get your head around such things.

These changes, however minor they might seem, have clearly given Alex G something of a new perspective on his approach, although his sound thankfully retains the charm of his previous work. Where Rocket was a fairly direct album, filled with songs that possessed a straight up folk influence (Bobby, Powerful Man, Alina), House Of Sugar is, at least on first listen, a much hazier affair and harder to pin down.

Opening with Walk Away, Giannascoli’s high pitched wail drifts over fuzzy percussion, manipulated vocal samples, and a wash of guitar and piano. Sounding not unlike the early John Frusciante solo albums (Niandra Lades and Usually Just A T-Shirt in particular) It feels like a fever dream in which he’s constantly repeating “not today” to nobody in particular. The thing with Alex G albums is that they can constantly flip between styles and ideas. What seems simplistic can reveal itself to have dense layers. House Of Sugar is perhaps the most accurate summation of his career to date, touching on every facet of his approach. Strange instrumentals and processed vocals  (Project 2/Near) rub shoulders with most straightforward songs (House Of Sugar), the concepts of good and evil drift throughout the album, with Giannascoli never really settling in one camp or the other.

It’s perhaps these constant struggle between opposing forces that sits at the heart of House Of Sugar. On the beautiful In My Arms he states “good music makes me wanna do bad things”, where as the darkened thrum of Sugar is summed up on one particular lyric site quite simply as “Alex doing a satanic ritual”. On Gretel, he finds himself constantly being pulled back to the nursery tale confectionery house, despite the danger that lurks there (presumably a murderous witch and diabetes). Hope takes the setting of a previous residence as a launching point (Giannascoli once lived in a house on Hope Street). But here hope is coupled with the thoughts of sadness and an absence of hope as he explores the circumstances that led to  a friend who passing away,  The gentle lope of Southern Sky explores the nature of dreams and how they can delight and terrify. “I can’t pick and choose these devils in my patterned dreams” he croons, accepting that he has no control over what his slumbering mind might throw up. As the refrain of “it’s okay we don’t cry we love the southern sky” comes to a close, he juxtaposes that positive thought with the music motif of “Ring-A-Ring-Of Roses” the rhyme often associated with the Black Death, itself a cheery song with sinister depths.

Sweetness and light,  darkness and danger are themes that all over the record, and evidently you can’t have you can’t have the good without the bad. Thankfully he’s wrapped these ideas in a series of songs that keep you coming back for more, constantly trying to untangle them. These songs might not be his most immediate, but House Of Sugar, it rewards repeated listening as these songs start to reveal their hidden depths with every listen. Whether its ever possibly to get right to the bottom of them is another matter, but really, it’s the mystery of them that makes them so appealing.