by Sam Shepherd
published: 20 May 2017 in Album Reviews
Tweet 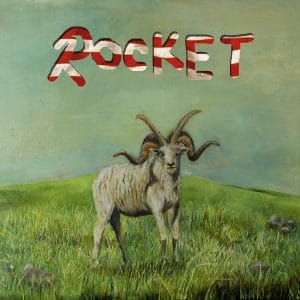 It is fitting that Alex G (Alex Giannascoli) has now started utilizing his occasional stage name of Sandy for this release. Not only does Giannascoli inhabit various versions of himself, but Rocket is an album of many personalities. They’re in the lyrics, as sections of autobiography combined with various tales and character studies, but it’s also in Giannascoli’s music. This is perhaps the most diverse album of his career to date, which, considering his previous releases, is saying something.

After building a fanbase slowly on Bandcamp, his cult-like status began to shift in 2014 when his fifth album DSU started to receive more widespread attention. He followed that up with highly acclaimed Beach Music, his first album for a major label, and from there Mr G/Alex/Sandy/Giannascoli’s star started to ascend in earnest. His talents came to the attention of Frank Ocean who asked Giannascoli to play guitar on his albums Endless and Blonde.

The nature of his time with Ocean allowed Giannascoli to re-evaluate the way he works. Ordinarily a purely solo artist, this time around he’s embraced collaboration and bought a few collaborators into his domain. With Samuel Acchione and his brother contributing guitar and bass, along with John Heywood (guitar) and vocalist Emily Yacina, Rocket is a much more rounded and filled out effort. Not that any of Alex G’s stripped back charm has been lost, but the addition of new blood does seem to have expanded his palette somewhat.

It is Molly Germer’s violin that is perhaps the most important addition however. Her contributions veer from country dance string shredder to chaos administrator; in fact it is not too far of a stretch to suggest that in Germer, Giannascoli has found the John Cale to his Lou Reed. This is not such a far fetched comparison, as Giannascoli finds himself inhabiting a series of different personae throughout the album, a technique that Reed (and David Bowie) employed frequently. For her part, Germer is not beyond transitioning from chaos to defined hooks in a heartbeat.

This habit of utilising different names and viewpoints gives the album a constantly shifting character. Opening up with Poison Root, there are times when Giannascoli sings through gritted teeth as banjo and ominous piano notes combine behind him. It’s hard to hear him sing “now I know everything” without detecting a certain sense of menace attached to those words. With Germer’s violin throwing out quick snatches of uncertain noise that fade in and out of focus, this could be the most threatening introduction to an Alex G album so far.

Then, out of nowhere, Proud kicks in and we’re back into jaunty folk territory. There’s a bit of honky-tonk piano and a spring in the step as Giannascoli sings of looking after his “baby” financially and stating “so proud of you and everything you do, no matter what they say, they ain’t worth a dollar in change”. There’s a shift in tone as the song progresses though, with Giannascolli crooning “I want to be fake like you” before twisting his earlier line with “so proud of you and everything you do, doesn’t matter what I said, I’m better off dead”. The idea of an unreliable narrator is not new, but it’s rare to find one showing their hand so quickly.

Giannascoli’s use of characters allows him to discuss some quite unpleasant subjects with a reasonable amount of distance. Sportstar for example finds him inhabiting the body of an obsessive fan who will do almost anything for the object of their desire. The musical accompaniment is dreamlike and barely there but the character’s subservience and apparent need to be hurt by their idol stands out dramatically. Of course, the fact that Giannascoli’s vocals are auto-tuned could imply that this is a story not to be entirely trusted, but on an album where the mood changes so quickly, it is hard to ever really be sure.

Powerful Man’s country strum is delicate and heartfelt, but manages to depict a family life that is shot through with violence and uncertainty. Even the dreams of this powerful man are a mass of contradictions. The idea of heaven and love needing the both the protection and threat of a gun is writ large in the line “Had a dream about a promised land, walking round with a big gun in my hand. When I look in the eye you’re going to tell me you love me and hold me tight”. As a summation of where the world is right now, it’s fairly damning, despite the apparent well meaning thoughts of the protagonist.

Amongst the tales of desperation, love gone bad, and self-destructive behaviour, there’s a considerable smorgasbord of music on offer too. There’s the clattering experimental instrumental of Horse which sounds like a consciousness falling apart, the full on oppressive beats of Brick which sees Giannascoli pulling on the darkest corners of hip hop for inspiration and at the close of the album is Guilty, a wide-eyed adventure into easy listening and jazz that is offset with a lyric about insecurity and crushing guilt.

All of which might make it sound like Rocket is a tough listen, but Alex G’s skill is in tackling difficult subjects and squeezing them into the most wonderful kernels of pop, and once again, he’s succeeded here.