by Sam Shepherd
published: 7 May 2016 in Album Reviews
Tweet 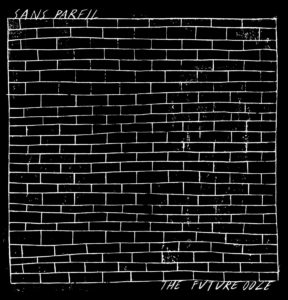 Now with a full band behind them, Sans Pareil, the duo of Thomas Dowse and John Casey, can explore the filth and depravity of human existence in glorious Technicolor. Or at least, they could have done if they’d wanted to. Instead, The Future Ooze is very much a black and white proposition, with the emphasis primarily on black. It’s not entirely surprising that the front cover is a crudely drawn brick wall (rendered in black and white, naturally) – the only thing missing is some crudely drawn graffiti or a rabble rousing slogan or two. There’s not even an amusing daubing of a cock and balls.

An opportunity missed, or so you would think, but rather than letting some easily jetted off sloganeering do the work, Sans Pareil prefer to let their lyrics, music and mood do the work.
The wiry guitar riff of Snake Footprints gets things rolling, and instantly nails its colours to the wall (black, obviously). Mining the history of punk and sleazy rock ‘n’ roll, it’s possible to hear the influence of The Stooges, The Ramones and The Clash all within the first few bars. The drum pattern echoes Motown, the stabbing guitars hint at punk and post-punk, whilst Dowse’s drawled vocals could have been delivered by Joe Strummer himself. It’s easy to picture the band leaning up against the black and white brick wall on the cover of the album, dressed in shabby denim and leather.

On first impressions then, Sans Pareil appear to be a band that is more than content to look back, rather than forward, or even concentrate on the present, even the first couple of songs concern an 18th Century smuggling gang. Yet, perhaps this is all scene setting a nod to the fact that mankind has always been hamstrung by its propensity for violence and obsession with greed. The concept behind many of these songs is, according to the band, our inevitable slide towards a self-inflicted apocalypse, and an erosion of our decency and humanity. That Dowse has based the concept on a William Burrows quote (“when you cut into the present, the future leaks out”) speaks volumes, Burroughs was quite adept at vividly highlighting the gritty and unpleasant aspects of life.

Sans Pareil really set about the task once their buccaneering introduction is done and dusted. The stabbing riffs of Waste Compactor sees people as rubbish, the line “don’t look down in the gutter” highlights society’s habit of looking the other way when poverty and social injustice is right in front of them. A Scumbag Panaroma is a speeding snapshot of a town-centre at night. The pepped up charge of guitars suggests celebration and indulgence whilst Dowse’s lyrics (and indeed the title of the song itself) feel like a conservative’s view of townie debauchery. At the other end of the spectrum the authorities are placed under the microscope too as Meat Wagon peers into police brutality by way of charged up, snarled punk.

At the heart of the album lies two sparkling gems amid the gloom. You Give Me (The Creeps) is initially a rather sedate, slanted crawl that examines the relationship between technology, sex, and surveillance. Pitched somewhere between Elvis Costello and Sonic Youth, this peculiar, discordant could almost be mistaken for a love song, but the sinister overtones are hard to miss. Codename:Tarantula exists in a parallel universe to the one inhabited by the rest of the album. It is gothic in tone, almost Gothamesque in fact.

It’s creeping and incessant riffing combines with the overblown and theatrical vocal stylings of Dowse, who gets additional points for throwing the imagery of the roof of an NCP car park into his dystopian exposition. It’s perhaps the defining song of the album, because as bleak as Sans Pareil’s future is, as it oozes towards us, there is at least a decent soundtrack and every reason to go out dancing like a frugging lunatic in a dank and seedy nightclub. It’s an atmosphere conjured up expertly on Codename:Tarantula. If that’s what the apocalypse sounds like, bring it on.