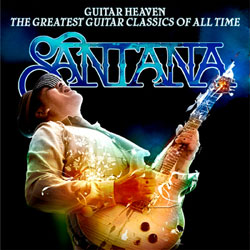 When you’re as big a musician as Carlos Santana, you can get away with self-indulgent projects, like an album of covers, and enlist several of your rock star friends to provide the vocals. Santana, who has created some classics of his own – Black Magic Woman, Oye Come Va and more recently Smooth, the 1999 mega hit featuring Rob Thomas – pays homage to everyone’s favorite air-guitar songs on his new album Guitar Heaven: The Greatest Guitar Classics Of All Time, and goes slightly overboard in the process.

This is essentially an album to showcase Santana’s prowess on strings, and Guitar Heaven seems to rely entirely on meaty riffs to the detriment of the performances themselves. Yet it opens with some promise as Chris Cornell leads the way to Led Zeppelin‘s Whole Lotta Love. Santana doesn’t tamper with Jimmy Page‘s original notes and Cornell proves once again that he’s one of the greatest voices in rock, delivering the lyrics with conviction and an intensity akin to that of Robert Plant.

Too bad then that the performances on the rest of the album are plain insipid. Stone Temple Pilots singer Scott Weiland’s version of The Rolling Stones‘ Can’t You Hear Me Knocking fails to deliver its vigour and Chris Daughtry‘s rendition of Def Lepperd‘s Photograph is like one of those covers you hear on popular TV talent shows. The Deep Purple classic Smoke On The Water, reinterpreted by Jacoby Shaddix of Papa Roach, is better left unheard, like AC/DC‘s Back In Black. It’s hard to imagine anyone singing it with the same ferocity as Brian Johnson. Jay-Z often does a decent cover live, but here Nas fails in his effort to create a rap-rock fusion. Instead, it’s a predictable mish-mash with a gratuitous rap and unnecessary female backing vocals.

The Doors keyboardist Ray Manzarek should really stop whoring out Doors classics. He joins Linkin Park frontman Chester Bennington for a bland performance of Riders On The Storm. Jim Morrison must be rolling in his grave – and that’s to say nothing of Marc Bolan. Gavin Rossdale emerged from his wife Gwen Stefani‘s shadow long enough to record the T Rex hit Bang A Gong. Press stop and download The Power Station‘s 1985 cover instead, sung by Robert Palmer, with guitar work provided by Duran Duran‘s Andy Taylor, who simply nails it.

Soul star India.Arie and cellist Yo Yo Ma commit the most unforgivable crime of all. They massacre The Beatles masterpiece While My Guitar Gently Weeps by giving it a new age vibe, stripped of its bittersweet melancholy and offset by Santana’s not-so-weeping guitar. In fact, his style borders on metal throughout the album, and the solos sound the same in every song. A bit of his famed Latin flair would have given them shape and panache. Granted, the point of a cover version isn’t to re-record the exact same thing but to give it a twist. Yet there are very few twists and far lesser turns here.

Sadly, expert guitar playing cannot carry an album. Moreover, it is too sterile and obsessively arranged, and the majority of the vocals lack that rock fierceness. Everyone is playing it too safe, with the production geared towards something mainstream and pop-oriented rather than experimentation and reinterpretation. Only Rob Thomas, who owes Santana his international stardom, adds flavor to Cream‘s Sunshine Of Your Heart and Joe Cocker character to Little Wings, a decent cover of the Jimi Hendrix classic.

Guitar Heaven is Santana’s idea of Rock Band and recorded simply because he can afford himself little luxuries. Here’s to hoping that his next album of original material, set for release next spring, will be a little more hedonistic.

More on Santana
Santana – Guitar Heaven
Santana – All That I Am