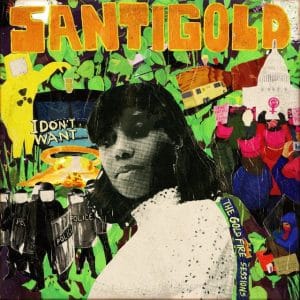 Ten years since her electric debut, Santigold is back with a collection of light-hearted, yet infectious pop tracks. There is a clear Caribbean influence running through I Don’t Want: The Gold Fire Sessions, at times approximating the mainstream dancehall sound that has been conquering the charts as of late, but it’s infused with a sense of fun stronger than on anything Major Lazer’s come out with in years.

Coo Coo Coo opens the album, a ditty about unwanted male attention that has a wistful air to it as Santigold muses on the type of attention she’s really after (“I just want some real love, just like on TV / nobody ever, walking by, really looks at me”), and the production adds a moombahton bounce to the catchy tune. Wha’ You Feel Like, meanwhile, is a more fierce track with punchy percussion and sexual overtones, and Crashing Your Party places lyrics about political engagement over a sweet reggae-style beat.

A particular highlight is A Perfect Life, with offbeat synth chords accenting an easygoing bassline and Santigold longing for the titular perfect life. The chorus melody that blissfully floats around its tonal centre, the idiosyncratic drum machine loop and the splashes of guitar come together to form an irresistable vibe.

As the title indicates, this album was produced in a more concentrated space of time than her previous releases, and the dubby sound effects placed throughout as track transitions give the impression of a relatively low stakes mixtape. This is no bad thing though, as the creative synthesis between her and producer Dre Skull means there isn’t a dull moment on the record. I Don’t Want: The Gold Fire Sessions is a gem, an energetic and hook-filled album that leaves the listener wanting more.