Santigold – Master Of My Make-Believe 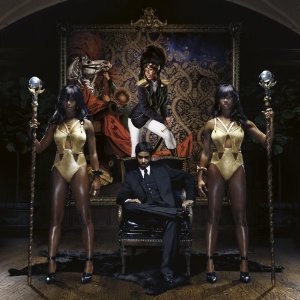 Santi White’s 2008 self-titled debut under her former name Santogold now seems a rather quaint reminder of pop before the explosive arrival of Lady Gaga. Santigold’s debut was an engaging and inventive collection of progressive dance flavoured pop with a liberal speckling of new wave rock, dancehall and all manner of other influences mixed in for good measure.

While White was beloved of the music press and hers was a hip name to drop, she never really broke through to the mainstream and was left in the shadows of M.I.A., an artist she is often compared to. In the intervening four years, while M.I.A. has descended into incoherent political ramblings and tired shock tactics, Santigold has laboured away on that troublesome follow-up while pop has moved on at breakneck speed, putting her in danger of being left behind. Years later, Master Of My Make-Believe sees White firmly embracing her own spirit and identity, though perhaps leaving some of her idiosyncratic inventiveness behind, leaving her rather stuck between sonic invention and worthy musicality on the one hand and the bright, bold and brash world of contemporary pop on the other.

Santigold is an artist who seems ready made to be an all-conquering pop star with a striking look and a penchant for openly speaking her mind, not least her recent tirade about the state of contemporary pop, in which she referred to LMFAO as a “joke band”. However, on Master Of My Make-Believe she tiptoes around the margins, threatening to burst through but not quite doing so. A slight air of restraint and a feeling that she is holding something back makes the album, in places, an infuriating listen.

As the album title suggests Santigold is certainly not short on confidence, and her singular vision is all over the album despite the presence of bewildering assortment of producers including Diplo, Switch, Buraka Som Sistema, Boys Noize, Dave Sitek, Greg Kurstin and Nick Zinner of Yeah Yeah Yeahs. Zinner’s band mate Karen O pops up with a verse on the bouncy singsong dancefloor thrust of opening track Go! Followed by the excellent insidious single Disparate Youth and pulsing electro dancehall of Fame, these opening tracks make for a very promising start to the album.

Yet that standard does not continue as the album settles into a pattern of nagging familiarity. One of the best qualities of Santigold’s debut was its sense of playful exuberance, yet here she appears to have traded most of that in for an earnestness that stymies tracks that should take off yet remain resolutely grounded.

The lilting skank of This Isn’t Our Parade and the sedate The Riots Gone are far from poor songs, but they leave an inescapable feeling that Santi White is capable of so much more. The main problem is White’s rather brittle voice, which is ill suited to slow paced introspection. It’s telling that Master Of My Make-Believe’s best moments come as the pace picks up and White’s personality really comes to the fore.

The Keepers is a standout anthem featuring by far the album’s best chorus and Look At These Hoes – a Diplo and Switch co-production – is a return of sorts to the unencumbered free spirit of 2008. Over an insanely addictive electro dubstep beat, White is on supreme form, delivering perfectly poised, whip smart rhymes about these “Bitches who ain’t fucking with me”. This is the real Santigold.

The bratty chant of previous single Big Mouth features White sounding at her most confident and is a glorious way to end the album, careering over tribal beats and brash vocals to an exploding ravey climax. It is fantastic stuff and an example of how great this album could have been.

It is always difficult following up a debut album, particularly if it takes you nearly four years to do it, and Master Of My Make-Believe is both beguiling and frustrating. In her quest to make her own brand of gimmick free progressive pop, Santigold has made an album that, for all its faults, intermittently works. And when it does hit the mark it does so exceedingly well.