by Darren Lee
published: 28 May 2012 in Album Reviews
Tweet 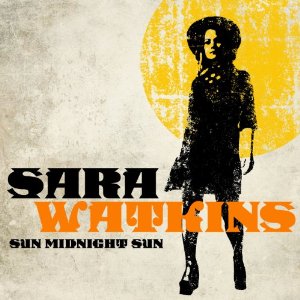 Sun Midnight Sun is the second solo album from talented fiddle player and singer/songwriter Sara Watkins. Watkins’ work seems to be high in demand; she’s a regular podcaster and you can hear her accompanying The Decemberists on their recent tour and subsequent live LP. This disc contains a variety of guests and collaborations to more than whet your appetite, but where her peers pitch their tents in the indie-folk camp Watkins seems to be leaning more towards a country sound.

The Foothills starts the album with a brilliant piece of multi-layed fiddle work, creating a toe-tapping Appalachian atmosphere, and this brief instrumental serves as a great calling card for her skills with a bow. Watkins follows up with the jaunty and comparatively simplistic You and Me, a sure fire radio-friendly track that’s commercial appeal surely earmarks it as single potential.

And therein lies the album’s weakness. For every great moment such as a duet with Fiona Apple on the frenetically menacing cover of The Everly Brothers’ You’re The One I Love, there’s an unashamedly commercial song that feels like it’s aimed directly at US radio stations. There’s nothing wrong with trying to be popular. Popular pays the bills and is… well, popular. But given her pedigree it feels like some tracks play it too safe, despite some strong vocal work. These vocals contain more of a hint of Sheryl Crow and maybe that’s been pushed too far for those expecting the next Gillian Welch. There’s nothing especially wrong with these tracks- Willie Nelson’s I’m a Memory is a catchy highlight, but it feels more geared to the tastes of the US country market rather than those of us on other shores.

There’s some more great instrumental work in the form of The Accord, much longer and expansive than the album’s opener. It’s a clear indication of what she’s capable of and the reasons why she’s so highly sought after. The album closes with Take Up Your Spade, a Woody Guthire-eque ballad and a rousing conclusion to the disc. It’s these moments when the folk aspects of her work are thrown into focus that the album really shines.

Overall this disc is a well-made breeze of strong songs and great playing, but the moments of fence-sitting hold it back. Watkins is undoubtedly a great instrumentalist so the sun is far from setting on her career, and we’re certain to hear more of her in some form or other, but it needs to be out of the comfort zone that’s currently struggling to contain her potential.