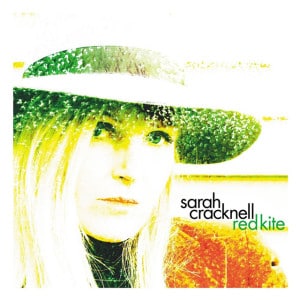 It is, believe it or not, Saint Etienne‘s 25th anniversary this year. First formed in 1990, Bob Stanley and Pete Wiggs experimented with a couple of vocalists when they first started, before settling on a certain Sarah Cracknell. It’s a partnership that’s flourished over the decades, and is one that has seen Cracknell only tempted down the solo road once before.

Yes, Red Kite is only Sarah Cracknell‘s second solo album, following up 1997’s lovely if rather lightweight Lipslide. Yet where Lipslide didn’t stray too far from the Saint Etienne template, Red Kite marks a slight departure – nothing too dramatic of course, but the mood is more folky and pastoral than electronic and synthy this time around.

In fact, suitably enough for an album released in the middle of June, this is a very ‘sunny’ album. Maybe it’s the song titles – On The Swings, Underneath The Stars – but this sounds like an album custom-made for lazy days and humid evenings. On The Swings is wistful and languid, while Hearts Are For Breaking has a lovely, ’60s feel to it, the sunniness of the melody contrasting with the dark cynicism of the lyrics.

Although there’s an air of easy familiarity to much of Red Kite, there’s a fair few surprises as well, chief amongst them Nothing To Talk About, a duet with Nicky Wire of Manic Street Preachers. Wire has never been known as the strongest vocalist around, but he sounds surprisingly good here, bouncing well off Cracknell’s more polished voice – and the song itself is one of the strongest on the album: immediate and catchy, with an attractively strident air to it. Wire isn’t the only guest star on Red Kite, with London duo The Rails (featuring Richard & Linda Thompson‘s daughter Kami) adding some Staves-like harmonies to the beautiful Take The Silver, a country/pop number that could easily sit in the Fleetwood Mac canon.

The only time that the album veers from its predominately pastoral, lilting air is on I Am Not Your Enemy, a startlingly doomy affair, featuring howling guitars and an almost malevolent feel to Cracknell’s voice. Although it sounds a bit jarring, at least compared to the relaxed pace of the rest of the album, there’s something strangely compelling about it. In fact, there is a darker side to Red Kite if you delve deep enough: witness the eerie atmosphere in the cover version of Mojave 3‘s The Mutineer, or the sad resignation evident in the country-flecked Ragdoll.

As with Lipslide, there sometimes seems to be a tendency for one track to flow into the other, so relaxed is the general atmosphere. And, as with that solo debut, it’s impossible not to compare the songs here to Saint Etienne’s finest – while there are no bad numbers, nothing comes close to Cracknell’s glory days with Wiggs and Stanley (a new Saint Etienne record is due next year, incidentally). That’s not a huge criticism, as they’ve written some of the best pop songs of the last 20 years, but it does make Red Kite feel a bit like a distraction while waiting.

It’s always good to hear Cracknell’s voice though, and Red Kite is bound to be a hushed, understated, and at times rather lovely soundtrack for the (hopefully) balmy summer days ahead.