by Helen Clarke
published: 9 May 2011 in Album Reviews
Tweet 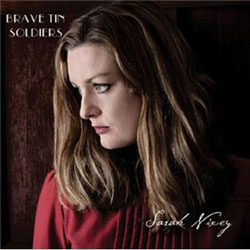 Despite being lured into Black Box Recorder with the promise of fame, Sarah Nixey never quite made the breakthrough many predicted when the band released England Made Me, in 1998. But still, for a generation of indie fans she has one of the most recognisable voices in pop, to be filed alongside Saint Etienne‘s Sarah Cracknell and theaudience-era Sophie Ellis-Bextor.

The whispered, breathy and sultry vocals best remembered on Black Box Recorder’s big hit, The Facts Of Life, in 2000, earned Nixey the reputation of being something of an ice queen. With this, her second solo album, she might have thawed but she’s as seductive as ever. Brave Tin Soldiers debuts a softer, more organic sound than we’ve heard before, but her roots are still a steering force. Black Box Recorder reformed in 2006 following a two year hiatus, only to call it a day last year. With more than a decade of working with band mates Luke Haines (ex The Auteurs) and John Moore (ex The Jesus And Mary Chain), it’s not surprising she’s developed a taste for the macabre, and the subjects that shape Brave Tin Soldiers include suicide, murder and kidnapping. But, incredibly, it’s not all bleak.

Single Brave Tin Soldiers is warm and soothing and, for the uninitiated, showcases her vocal range, as she loops her voice around a laid back, radio-friendly chorus. It’s followed by Cat’s Cradle, an altogether more kooky track, both lyrically and vocally. Telling the tale of a woman with Stockholm Syndrome, she purrs, with more than a nod to Kate Bush, “I loved you, Hate you now you’re gone, Oh master, My Loved One, When everything is said and done, I return to cat’s cradle.” It’s perhaps an odd subject choice, but there’s no time to muse over it, because the next song, Gathering Shadows, is even bleaker. A murder ballad (“Father’s got a gun, Wartime souvenir… Said he’d been double crossed, A mother and a son shot in the street,”) made even more eerie thanks to her nonchalant, honey-drenched voice. Love Gets Dangerous brings about a change of tempo, with a disco beat that would get the early birds at an indie disco tapping their feet. But nothing’s ever that simple Nixey, and her twisted lyrics haunt throughout: “Discovered you were still alive, When you saw yourself through my eyes, Tranquilised comatose… Dare to love me.”

Some songs are far from ambiguous, more like poetic investigations into the bleak. Silent Hour, for example, studies the spate of teenage suicides in Bridgend, while Black Rose tells the story of Betty Corrigall, a 16th Century woman disgraced when she fell pregnant out of marriage. Abandoned and ashamed, she killed herself. It’s a heartbreaking tale that’s worked it’s way into many a ghost story, and as such is prime Nixey lyrical territory. It’s followed by The Burial Of Love, which Nixey describes as the saddest song she’s ever written – which is quite a statement.

It sounds a hefty record to contend with, but it’s actually an easy listen; her voice, while pouty and oozing sex, lures the listener in with the promise of fascinating, wide-eyed stories. It’s a contrast that works brilliantly, and the warmth and charm of the gentle strings she works around make it a perfect summer evening record.

More on Sarah Nixey
Sarah Nixey – Brave Tin Soldiers
Sarah Nixey – Sing, Memory
Sarah Nixey: “I wanted to play around with the idea that I’d be singing on this record, rather than whispering” – Interview