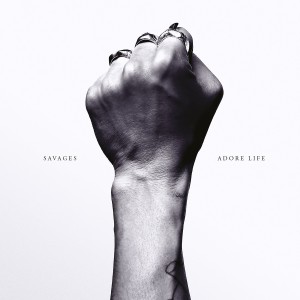 There are 152 fewer words on the front cover of Adore Life then there were on Savages‘ first album. And one more fist. That, in itself, suggests a couple of things. The first, the fist, is representative of defiance, or solidarity, or aggression, or just plain old power. The absence of the manifesto… well, that’s attributable to a band who are done with explaining.

Both are entirely in keeping with what lies within. Defiant, solid, aggressive and powerful are all words which you could level at Adore Life. It’s also an album of supreme confidence, one which has no issue with simply stating its case, of which it is certain. It has an astonishing level of clarity about it. The purposefulness of a band who aren’t fucking around. And it’s not like the debut was a procrastinating flake, pre-occupied with dilly-dallying, then shilly-shallying followed by a good session endlessly beating bushes. It’s just that, comparatively, Adore Life is as blinkered as a show pony bolted to a handcart staring at a big nosebag of hay.

Additionally, the target they’re aiming at seems larger. It would have been hard to imagine the Savages of the debut making something as poignant and as heartfelt as Adore. Yet here it stands in the centre of the record, hands in the air, proud as can be asking “is it human to adore life?”. It (Adore) is a truly monumental thing. It begins as an exercise in subtle restraint, before building with the slow deliberation of Columbo confronting the killer to end as a massively swollen epic, complete with sky-scraping grandeur and a chest-beating vocal from Jehnny Beth.

Generally, there’s something less nihilistic about Savages on this album. Which isn’t to say they can’t still scorch the earth with the best of them: Gemma Thompson’s riff on The Answer is serrated enough to fell trees; the grinding T.I.W.Y.G is furious and ferocious and wildly exciting, but there’s definitely more here than just a retread of the short, sharp, self-destructing shocks upon which Silence Yourself was mostly built.

Some things do remain the same though. Throughout Adore Life there are innumerable examples of why Fay Milton and Ayse Hassan are near untouchable as a rhythm section. There’s the undeniably funky strut that brings Evil and Sad Person to life, or the sensational way they locks together on When In Love in this self-reflexive loop which results in a breakneck sense of momentum.

But the melding of the best bits of their past to a new future shouldn’t be a surprise to anyone who’s seen Savages live over the last year or so. That’s precisely the sort of progression they’ve been showcasing on stage, and it is ably captured here. And you don’t doubt that they know it. Adore Life is a magnificent record.