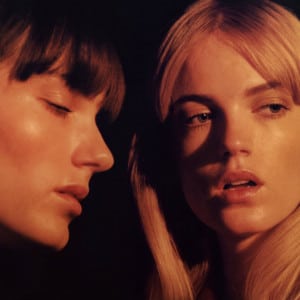 Their début album Lucid Dreaming landed in April following a tortuous gestation period. First the sisters had to change their name from ‘Saint Lou Lou’ following an alleged copyright infringement, then their deal with Columbia fizzled out after what Miranda has described as a “classic case of commerce and creativity that didn’t mix”. Lucid Dreaming therefore arrives via the sisters’ own label, À Deux.

Although the above comment might suggest that Lucid Dreaming will be a difficult album, short of potential singles and unlikely to grab the attention of radio playlist-compilers, it’s anything but: consistently melodic, it’s packed full of hooks and almost suspiciously on-trend. The only moment likely to cause a conservative A&R person to choke on their soy latte is the vaguely shoegazey outro to Hard For A Man. The rest slips down easily.

Lucid Dreaming’s sole outlier is Games For Girls, a throbbing electro-pop number produced by Lindstrøm. In isolation, it’s hard to resist, but its directness is at odds with the reverb-laden, gauzy sounds of the album’s other 10 tracks.

Highlights abound. Opener Everything We Touch is a piece of windswept pop that would’ve slotted nicely on to Lykke Li’s second album. Julian is the perfect companion piece to Bat For Lashes’ Daniel, being a similarly infectious ode to a lover on the wrong side of the tracks. Angels (Above Me) has a lovely, serpentine chorus, while Peppermint is a subzero ballad with vaguely sinister overtones (“I still feel your kisses burn with peppermint”). Best of all is Wilder Than The Wind, a beautiful power ballad that may leave the emotionally vulnerable listener seeking excuses as they reach for the tissues.

In the seven months since its release, Lucid Dreaming has failed to make much of a commercial impact in the UK at least, where none of its singles has made the Top 40. Say Lou Lou might be fated to end up alongside artists such as Annie and Little Boots, both of whom produce gold-plated pop songs for a selective, yet enraptured set of fans. There are, of course, worse fates, but it’s hard not to feel that Say Lou Lou deserve better.