Sébastien Tellier – My God Is Blue 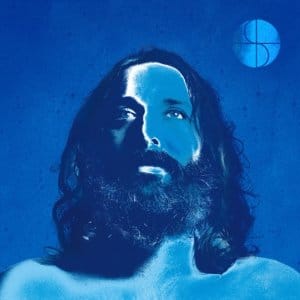 Music needs characters like Sébastien Tellier. The Frenchman is truly one of kind, able to make what on paper should be the cheesiest of easy listening sound effortlessly cool. On My God Is Blue he explores a number of different styles, broadening his sonic palette and proving once more his dexterity, a musical chameleon able to use many different colours.

Here, though, the colour is blue, and it ripples through in waves of positivity. Tellier gives us effortless, slinky disco (Cochon Ville), fiery organ toccatas and exuberant guitar solos (the closing instrumental Yes It’s Possible) and lovelorn poems (The Colour Of Your Mind).

Characteristically he expresses himself through often cryptic lyrics, which are sometimes hard to hear as his voice gets lower in the mix when set against an orchestra, but the sentiment still shines through. Because the lyrics cannot always be determined there is all the more reason to buy a hard copy of the album, replete with all the words and some lush, lavish illustrations. All in blue of course.

Throughout the music exudes an effortless cool, nowhere more so than in the cosmically dressed The Colour Of Your Mind. There is a vast, orchestral grandeur to Sedulous, while the widescreen Bond-theme pretensions of Russian Attractions are thoroughly convincing, a kind of From Paris With Love. Tellier indulges himself throughout, able to move at the flick of a switch to the more sugary easy listening on Mayday – yet even this has a degree of cool in its execution. At the outset of Against The Law he adopts a brilliantly po-faced mood, deadpanning before the shuffling beat kicks in.

The end result is an ambitious follow-up to 2008’s more electronic Sexuality, where the producer was Daft Punk‘s Guy-Manuel de Homem-Christo. This time he sets his sights on loftier, widescreen sounds, and he just about pulls it off – ambitious yet totally in keeping with his musical style. So cool is the end product, it’s difficult to imagine Tellier recording it without his trademark sunglasses. Forget the furore around Fifty Shades Of Grey; this is Tellier’s Fifty Shades Of Blue, and it is a whole lot sexier.