SBTRKT – Wonder Where We Land 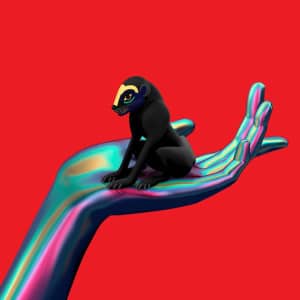 If you want to get ahead, get a mask. That seems to be the motto in the EDM community right now, with various mysteriously masked figures following in the footsteps of the likes of Daft Punk and deadmau5. A couple of years ago, Aaron Jerome and his collection of Native American ceremonial masks proved the benefits of anonymity when his debut album under the name of SBTRKT opened the door to a whole new wave of skittery, melancholic dance music.

Three years on, and the follow-up to that self-titled debut offering demonstrates Jerome’s new-found clout. As well as some familiar names – Jessie Ware and regular collaborator Sampha, there’s also added star-power in the form of Vampire Weekend‘s Ezra Koenig, Chairlift vocalist Caroline Polacheck and ASAP Ferg. It results in an album that feels like a natural progression from Jerome’s debut, even if it sometimes feels frustratingly inconsistent at times.

When Jerome’s on form though, nothing on earth sounds quite like him. The terrific New Dorp New York is a contender for one of the best tracks of the year, an exhilarating rush of a song that sees Koenig deadpanning vocals like “Flags flapping in Manhattan…gargoyles gargling oil, peak of the Empire, Top of the Rock” while Jerome creates the sort of clattering energy that a song about New York City demands. There are plenty of allusions to previous Vampire Weekend songs, and there’s even time for a lyrical nod to The Sweet‘s Blockbuster for good measure.

The title track also shows off Jerome at his best, a stately, slightly doomy ballad with Sampha adding some typically smooth and atmospheric vocals – a fine sequel to one of SBTRKT’s finest moments, Hold On. Even better is the barnstorming highlight Higher, featuring a truly arresting rap from 18 year old newcomer Raury. It’s an intriguing new development for Jerome, proving he works just as well with rappers as he does with RnB singers, and certainly announces Raury as a major name to watch out for in 2015.

It’s high points like this though that mean the less impressive moments can prove frustrating. Look Away, featuring the vocals of Caroline Polacheck, seems half-sketched and never really seems to gain any momentum, while Jessie Ware sounds as wonderful as you’d expect on Problem Solved, yet the melody proves too meandering to really become memorable. The same accusation can be levelled at the brief piano interlude of It It Happens, although as this is followed by the glorious rush of Gon Stay (featuring another great vocal from Sampha), it seems less important somehow. Temporary View also suffers from being rather too hazy and dreamy, leaving one yearning for some energy (which is, thankfully, provided elsewhere on the album).

The restless search for a musical identity is one thing that hampers Wonder Where We Land – Jerome is very good at creating downbeat soundscapes and makes a good foil for a soulful voice, but the results are even better where he tries to break the mould. So, tracks like the aforementioned New Dorp New York, and the minimal disco anthem The Light are thrilling adrenaline rushes to the heart, while instrumentals like Osea and the odd little ambient interludes like Day 1 and Day 5 just serve to slow down the record’s momentum.

In the end, Wonder Where We Land sounds like an album of great moments, rather than a consistently great record. There’s enough demonstration of Jerome’s development as a producer though, and in the closing druggy, paranoid haze of Voices In My Head – featuring a stellar rap from ASAP Ferg and some featherlight vocals from Warpaint – there are hints of even more strings to his bow. Given a bit of quality control, the future seems bright for this particular masked man.