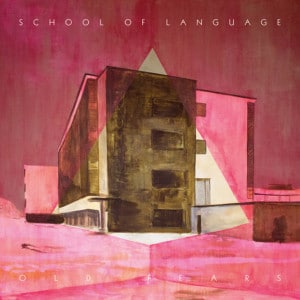 There’s something comforting about the Brewis brothers. That’s not to suggest they’re boring and predictable. Rather, where there’s a Brewis, there’s usually invention expressed in a half baroque, half light-hearted kind of way. You’re pretty sure something curious and unusual will arrive, minus any pretension.

So, not predictable, but dependable. From continuing to be influenced by and supportive of their beloved Sunderland, to the attitude that pop can still be a deeply creative and inventive genre that thrills even the most cynical. Indeed, Field Music‘s Mercury nomination in 2012 for Plumb showed their blend of Krautrock-inspired pop can attract even the less cynical, shall we say. They should have won the thing, mind.

Now, with Field Music on one of their short breaks, the younger Brewis, David, returns with his solo School Of Language outfit some six years from Sea From Shore. Older brother Peter and Field Music are never far away, though – the band all appear here as well.

Old Fears does what it says, with a spine of songs related to what David described as “his formative years” and “things to do with love and things to do with fear”. Album opener Distance Between, with typical sounding Field Music high-pitched rippling guitar fused with elements of synth-driven funk and vocal harmonies all layered and producing a mound of texture, projects the fear created by love and relationships, especially with lyrics like: “Don’t let me explain, I can only lead you on. Don’t make me choose to turn away.”

Following track A Smile Cracks brings out the pop polymath in David: plenty of disco projected through the guitar, lots of funk again through the synth and bass. In turn, something more up-tempo and defiant is created, the lyrics reminiscing a period full of day-dreaming and drawing diagrams and plans: “The wasted time doesn’t seem bad looking back… when I think back, a smile cracks.” Happy memories of a more wide-eyed time, perhaps.

Suits Us Better brings us something entirely the opposite, with its sound rooted more in the experimental, with blankets of vocals on-top of one another (including some beat-boxing) against shimmering guitar and low-tempo keys. Title track Old Fears brings us a prog/Krautrock-like instrumental that is ominous sounding and at times menacing, while also having a sort of gentle delicacy – the last 40 seconds or so reminiscent of Faust at their most low-key.

In the press release, Justin Timberlake is cited as something of an “oblique influence”. To be fair, it’s not far off the mark; Dress Up does have something of the confident JT swagger to it, with Brewis’ vocal even mimicking Timberlake’s at times and the last minute or so reaching the sort of crescendo he’d be even proud of. Brewis’ love of well-written, quality pop music is undeniable; as Timberlake proved with his brilliant yet also frustrating The 20/20 Experience, both can still co-exist very happily indeed. Whether a well-respected musician or global superstar, it isn’t exclusive to anyone.

Meanwhile, Small Words is minimalist, measured and serious; the guitar is straightforward, the bass line doesn’t vary and the tempo is steady as Brewis sings about confidence slipping, “the epic conversation”, mentions of occupations and some enquiring whether he should “give it up”. Those typical types of conversations and discussions one has during those formative years.

Album closer You Kept Yourself follows in a similar vein, but there’s something defiant about it – “It makes no sense to go home” – with the final minute featuring a soundscape of people talking and gentle traffic noise, before a blaring saxophone enters and the song fades out to gentle piano. It’s as if some sort of discovery and realisation has been made, with a degree of contentedness following.

Musically, it’s for the most part difficult to distinguish Old Fears entirely from Field Music releases. This is perhaps understandable. However, where it does firmly distinguish itself is through David’s honestly and introspection – something rewarded when pursuing your own project and one of its advantages.

At times, it’s the lyrics in Old Fears that firmly stand out over the music itself. While there are obvious pop and other quirky moments one typically associates with Field Music and the Brewises, it’s also a serious and rather personal record – terms you wouldn’t normally associate with them. It’s a very welcome, new dimension and has everything that makes Field Music and the Brewis brothers so dependable and loved, but more… heart. That certainly isn’t a bad thing.

School Of Language MP3s or CDs

School Of Language on Spotify