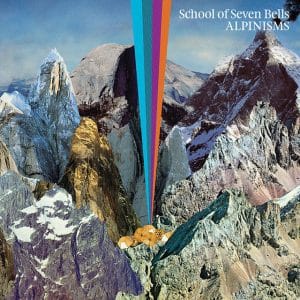 ‘Ethereal’ is one of those words awarded too much currency in music reviews these days. What it ends up meaning now is the sort of music that might soundtrack a banking advert or an environmental awareness programme. In other words, it’s a byword for music of our latest recession.

Well now that depressing observation is out the way, let me nail my colours to the mast and say that the debut album from the School Of Seven Bells is, indeed, ‘ethereal’. There’s no other word for the harmonies sisters Alejandra and Claudia Deheza can produce – though the phrase “totally beguiling” might help.

A lot of the responsibility for this also lies at the door of Benjamin Curtis, the vocally silent third member of the group. It all becomes clear through the course of this record why he left the Secret Machines – with the issue not so much musical differences as people talking a totally different language.

Those looking for rock music won’t find any traces of feedback or distortion here. What they will find, however, is a predilection for gorgeous harmonies, sung as if from afar, while behind the scenes an array of shimmering colours work their magic.

It would be easy to determine from this and the band’s composition that similarities to Cocteau Twins are inevitable. And, to a point, there are similarities. But here the beats are crisp and take a more active part in the workings of the music, so that there is a strong sense of momentum even when the vocals reach a dream like state.

Wired For Light is the apotheosis of this approach. With simply gorgeous harmonies, the Deheza sisters’ vocals are a joy to listen to, while the beats underneath give a surprising, understated power. Meanwhile Iamundernodisguise sounds like the early stages of some sort of ritual played out over a surprisingly rhythmic beat, the odd, stuttering vocal strangely effective.

Often the lyrics are totally complimentary to the music. When the beatless For Kalaja Mari begins with the entreaty to “walk with me for a while, to my house on the hill, forget where your body lies and I’ll forget mine as well,” it’s easy as pie to follow suit. In fact the vocals are such that pretty much any command from these two would be easy to follow.

You’ll gather from all this praise that School Of Seven Bells are something pretty special. “Do you feel the rain?” asks the same track later on. Yes, we do – but the music is wondrous, and we’re not even aware it’s falling.