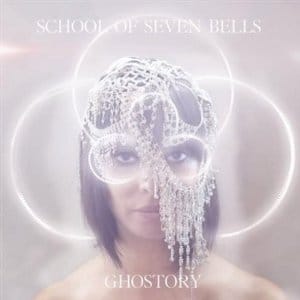 School Of Seven Bells suffered a blow with the departure of singer and keyboardist Claudia Deheza for personal reasons just over a year ago. Yet Alejandra, Deheza’s twin sister, has regrouped with Benjamin Curtis and come back with a stronger sound and an impressive resolve. The unexpected departure appears to have done nothing to harm the duo’s creativity, and their willingness to push forward and explore new territory on new album Ghostory is laudable.

The obvious and complacent thing for the pair to have done would have been to multitrack Alejandra’s voice so that the two vocal parts remained. But Ghostory, rather than resting on the laurels of the band’s successful sound up to this point, adds a harder edge to the rhythm and consciously moves on a step.

Where there were softly brushed drum beats, now there are harder drums and more electro loops. The wistful, sighing harmonies are still present at times, but there is an urgency to the music that wasn’t apparent before. On the single Lafaye this manifests itself through driving beats that operate at a house music tempo without ever crossing over to the style itself, with the sighs and swathes of the windswept production overriding the tough beats.

Lafaye, it turns out, is the central character of what is a concept album based on the ghosts that surround the young girl’s life. Given Curtis’s past in Secret Machines it shouldn’t come as a surprise that elements of progressive rock are finally surfacing in this way, but the pair manage to hone this concept in to a nine track album that has commendably little in the way of filler, and sports an appealing streak of darkness that runs through the gorgeous harmonies.

It also benefits from a consistently high level of energy, nowhere more so than in The Night, an opener replete with more than a little adrenalin, euphoric rushes of atmosphere and percussion. Curtis clearly knows his way around a mixing desk, and though this occasionally means that Deheza’s vocals are a bit muffled – the only time her sister’s presence is obviously missed – the feeling behind them still comes through.

An impressive achievement then, and a sign that although School Of Seven Bells have a signature sound that is easy to recognise, they are open to development and musical exploration. With three album releases in four years, the signs are they are gathering serious creative momentum.