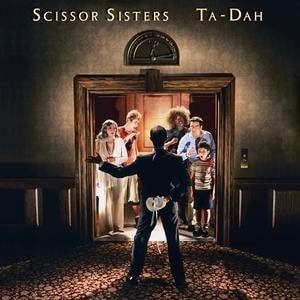 Scissor Sisters’ eponymous debut album was the UK’s biggest selling record of 2004. As tall orders come, topping a record that has so far shifted 2.4 million copies in the UK alone would be a sky-high challenge for anyone. But with lead single and opening track I Don’t Feel Like Dancin’ giving the Sisters their first singles chart number one, the scene is set for their unstoppably triumphant return.

Last time round they occasionally sounded like Elton John in his Pinball Wizard heyday. This time, Elton himself joins the Sisters for a tinkle of the Joanna on I Don’t Feel Like Dancin’ and the Broadway-tinged Intermission, while upcoming single She’s The Man is a straight-to-the-floor homage to Elt’s I’m Still Standing, from the rhythm up.

Singing dynamo Jake Shears, whose falsetto squeak has often been compared to that of Leo Sayer, sounds more obviously like Saturday Night Fever era Bee Gees‘ Barry Gibb when set amongst the high disco camp anthem that is I Don’t Feel Like Dancin’, but there’s a darker lyrical side to the album at once incongruous and ingenius when placed in such celebratory music.

I Can’t Decide, replete with jew harp, proves there’s more to the Sisters than ’70s disco pastiche with a ragtime, honky tonk burlesque setting for lyrics dripping with deeper meaning. “It’s not easy having yourself a good time,” Shears laments, as all around him the irresistible music insists quite the opposite. Ooh – a band-defining song title if ever there was one – finds Shears informing us: “I got magic in my dancin’ shoes.” And who’d argue, with a funked-up synth bass and an audience-pleasing chorus line: “Let me hear you say ooh”?

There are other references too. Shears claims he’d had a dream about Paul McCartney, so wrote a song named after the ex-Beatle. “It’s the music that connects me to you,” says McCartney to our hero. Yet the music in question sounds not a bit like McCartney’s output – this is closer to Prince on speed, complete with throwaway party comments and hooks galore. The Other Side, which follows, feels like a Duran Duran ballad, somewhere between A View To A Kill and Rio. Shears ditches the falsetto and reminds his audience that he can sing as well as squeak. In short, this is incredibly varied stuff.

One of the least immediate tracks is Might Tell You Tonight which reminds less of Elton John’s hooks and more of early John Howard‘s complex approach to glitterball somgwriting, suggesting Shears and co-writer Babydaddy have more to offer than crowd-pleasing anthems bedecked in glitter. Everybody Wants The Same Thing, by contrast, is a commercial, singalong close that would grace a Robbie Williams album as a standout track, even if here it’s much less interesting than the company it’s keeping.

There’s always time for a torch song where Scissor Sisters are concerned, and Land Of A Thousand Words is that moment, a Beatles-tinged wannabe Bond theme of poignance with strings arranged by Joan As Police Woman‘s Joan Wasser. This album’s Mary, it’s one of many songs that befits the term “grower”. (The father of all strings arrangers, Van Dyke Parks, offers his services on Intermission – is there anyone who doesn’t love the Sisters?)

Ana Matronic is, as she was on the first album, little in evidence. It seems the ersatz transvestite is on board as a live act counterpoint to Shears rather than an equal partner, but she does receive songwriting credits on two tracks (making her, in songwriting terms, the equal of Elton John here). Kiss You Off finds her in fine fettle as lead vocalist on a track that’s one part Blondie and one part Stuart Price.

But one of Ta-Dah’s more intriguing characteristics is that, by album’s end, we’re in a quite different place from the start. Bonus track Transistor takes on a dark new direction suggestive of a Gary Numan track minus the industrial tinges. It’s more evidence, as though it were needed, that Scissor Sisters are capable of surprises, ensuring critical reaction will match the inevitable commercial blitzkrieg.

So after you’ve allowed Ta-Dah the chance to make its case, fetch out the sequins, fire up the glitterball and get down. Scissor Sisters are well beyond quick fling status, and whether they feel like dancin’ or not, you will.