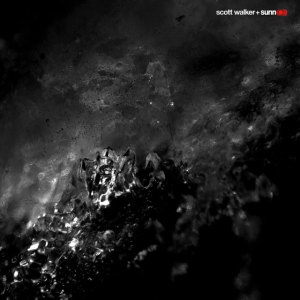 Scott O))). When this collaboration was announced, the reaction was largely one of fevered excitement. Scott Walker and Sunn O))) – the idea of these two idiosyncratic artists getting together appeared to represent some kind of blackened nirvana; surely Soused would be the most insane and heaviest album released this year, if not ever? Under the weight of such expectation, this needed to be something special, a collaboration that pushed each camp into unknown territory and explored new ground.

The reality of Soused is that, as good as it is, the results of this coming together are perhaps not quite as berserk as might have been imagined. Whilst both artists are known for their somewhat peculiar, off-kilter methods (recording in coffins, slapping dead pigs – the usual stuff) this album will not particularly surprise anyone familiar with both parties. Not sonically at least.

Sunn O))) originally approached Walker back in 2009, requesting his presence on their Monoliths And Dimensions album. Such a coming together isn’t as strange as it sounds. Walker’s trio of albums, Tilt (1995), The Drift (2006) and Bish Bosch (2012) are dark, and occasionally twisted avant garde works that have a great deal in common with Sunn O)))’s output; listen to the purring guitars of Buzzers from The Drift, for example. Walker himself clearly saw a collaboration with the drone metal pioneers as an opportunity too good to pass up for good. He might have turned them down in 2009, but four years later he returned with Soused that, tonally, could quite easily be an addendum to his own Trilogy. Whilst Sunn O)))’s presence on the album is obvious, they are not quite as sonically brutal as one might expect. The drones are there, but despite the volume they were recorded at, Stephen O’Malley, Greg Anderson and Tos Nieuwenhuizen have actually provided a varied sonic backdrop for Walker to inhabit with his wordplay, filthy concepts and occasionally barking imagery.

That’s not to say that they are still not an imposing presence, but this might be their most diverse and considered work to date. For example, Brando, an everyday whipcracking tale of masochistic tendencies, opens with Walker’s overblown croon and a guitar solo motif that could have come straight from a cock-rock ballad which is cut across by some quick serrated guitar stabs. Bull, with its insistent drums and occasional guitar flourishes, finds them upping the pace and almost riffing. Hearing Sunn O))) operate anywhere above glacial pace is unusual, but utterly wonderful. Fetish utilises their drone as a backdrop for a cavalcade of chaotic noises. The reworking of Lullaby (originally written for Ute Lemper) finds them at a point where they could almost be described as delicate and comforting. It’s a sound befitting of a song that considers the realities of assisted suicide, but when coupled with Walker’s howling vocal line and a raft of screaming dissonance there’s a palpable sense of terror.

For Walker’s part, things are pretty much as you would expect. Vocally he’s the master of that unnerving theatrical croon. Lyrically, he utilises stark imagery, unsettling poetry and Roget’s Profanosaurus to create bleak, hilarious and disturbing songs. Anyone that uses the term bescumber in a song (it means to spray in shit for those curious) deserves some recognition.

There are numerous highlights to be found across these songs but Herod 2014 and Fetish stand out in particular. The first is a retelling, or an update, on Biblical infanticide that thrums with intense foreboding. Guitars loom from the drone like diving bombers and a saxophone screams, as Walker deconstructs My Favourite Things whilst thrusting disease, death and hopelessness to the forefront. “I’m closing in, I’m closing in” he intones as what sounds like an air-raid siren hollers behind him. This is real doom.

The hellish Fetish feels like a sonic encapsulation of Dennis Cooper’s Closer or Frisk, with Walker contemplating violent acts shot through with dark sexuality. It’s here that he sings of knives, scatlogy and spunk. Meanwhile O’Malley’s drones are surrounded by industrial noise, clanking radiators, squalling saxophones, and ominous synths. When the track fades to silence, it somehow becomes more harrowing. When it kicks back in again it’s the equivalent of passing out during a beating only to come round again to find it still going on. This is the song that finds both parties combining perfectly and creating something utterly breathtaking. A beating could do you the world of good, to paraphrase this album’s Brando.