Scouting For Girls – Everybody Wants To Be On TV 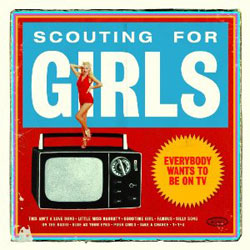 Who’d have figured? Scouting For Girls‘ This Ain’t A Love Song is a chart-topper (at present, for two weeks in a row, but that Number 1 spot is fickle and forever changing hands, so let’s not speculate on staying power).� Certainly, Scouting For Girls have paid their dues, escaping the pub scene and building a name for themselves.

But isn’t it just a bit inescapable that we’ve heard this all before? Consider the vague apery – probably unintentional, granted – of the verse melody; its phrasing very nearly mirrors Third Eye Blind‘s Losing A Whole Year. And the melodrama of the whole thing – swelling strings, power-pop pogo piano – just sort of sticks in the ear like grit in your shoe.

Scouting For Girls’ second album was scrapped in progress when the band realised their debut had caught on. It’s unfair to speculate, but the overall impression is that Roy Stride and company changed direction mid-piss and decided to give the masses what they wanted. To be fair, they’ve done just that. Everybody Wants To Be On TV has all the earmarks of a successful flash-in-the-pan pop album: bouncing beats, plinking piano (all the better to pogo to), somewhat wry but none too complex observations about the tricky nature of relationships, more na-na-na’s than you can na-na-na at, and an unobtrusive sheen, all the more perfect for eventual repackaging into background music for shops and on-hold music.

The music is not too much of a departure from their self-titled debut (though, there’s nothing here so enjoyable as Elvis Isn’t Dead). But the underlying feeling is that Scouting For Girls this time round is a band that has realised their own potential and as such, has resorted to heavy-handedness and shiny radio-friendliness. They’re a bit like the comedian who realises how funny his jokes are, and is suddenly dumbfounded when the audience doesn’t guffaw as raucously as he expects.

The single (and album opener; no burying the needle on this one) is an appropriate barometer for the album as a whole. The following nine tunes do very little to progress from Stride’s initial line of thought: “I’m a little bit lost without you, and I’m a bloody big mess inside.”

The cringingly titled Little Miss Naughty tells of a stupid indiscretion that ruins a potentially long-term and meaningful relationship, complete with vocoder-infused questioning of that fabled mirror-mirror on the wall. Really? Still with the Auto-Tune? In Famous, Stride muses (perhaps assuming the identity of one of the many young starlet heiresses who’ve overstayed their 15 minutes), “I want to be known for just being famous. I can’t act, I can’t dance, I can’t sing, but I’m young and I’m pretty.” This exploration of fame is hardly a novel concept, though with some prodding, it may have produced some new perspective. But the masses don’t want new thought, and Scouting For Girls know that.

With Everybody Wants To Be On TV, they’ve given those masses what they want. But there’s nothing for the discerning music fan. It’s MOR pop for teenagers and still-hip young professionals. Still, it’ll be a lot of people’s summer soundtrack, and in that, Scouting For Girls have succeeded in shaking the sophomore slump and turning in a consistent album of radio-ready singles.