Scouting For Girls – The Light Between Us 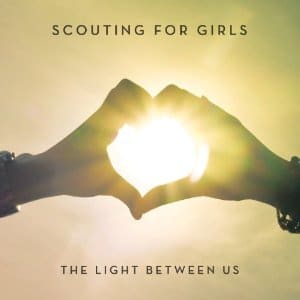 Scouting For Girls. These three little words are known to send people into fits of rage and panic with, quite possibly, good reason. In 2007 they released their self-titled debut and it sold by the bucketload; singles got played nearly every hour on the radio and you couldn’t leave the TV on for 10 minutes without hearing a burst of their unrelenting and cheery pop.

The mega-success of that album wasn’t to be repeated with their second effort, Everybody Wants To Be On TV, though it still sold well and the single This Ain’t A Love Song went straight to Number 1. This third album, The Light Between Us, is unlikely to surprise fans of the band nor its detractors. They’re still upbeat and it seems like they’ve still got plenty of energy left in reserve for 11 more sugary three-minute tunes drenched with big melodies and hooks. If there’s a motto that can best describe Scouting For Girls then surely it’s ‘if it ain’t broke, don’t fix it’.

Since it is more of the same, this will be good news for some and terrible news for others. Some will find a lot to like about the bouncy Rocky Balboa but others may find its attempt at relating the conquest of love to a dramatic boxing match rather tedious. Musically, it’s nothing ground-breaking or even noteworthy. Familiar chord sequences and rhythms dominate, but one senses that the focus was never on this aspect of their music in the first place.

Rather, it’s the lyrics that have always made this trio stand out. True to form, The Light Between Us is full of lyrical clichés. Every trick in the book is used exhaustively. Even the refrain in the bridge that concludes with the soaring phrase “My heart is like a waterfall” in Downtempo (which is anything but given its majestic wooooahs) makes it sound as if they’re using Coldplay for inspiration, and it’s not as if Chris Martin has an awe-inspiring way with words. Then there’s rhyming Xbox with ‘hands off’ (Snakes and Ladders is guilty of this crime), which is almost humorous in a lazy, cack-handed kind of way.

But, at the end of the day, they are what they are: a band intent on making nearly every song a single that is both hummable and slickly produced. Is anyone expecting them to write a dark and heavy concept album about a bitter break-up and its subsequent effects on the human soul? No, although, having said that, Make This One Last is the only song here that comes close to evoking sadness and pain. It’s about as big a change a tone as they’re likely to achieve.

It’s difficult to be angry at Scouting For Girls for what they do. The fact that they’re so undettered in their quest for that perfect pop song is something that, in an odd way, is admirable. What’s arguably more astounding is that they sound just as fresh-faced as they were five years ago, even if they are retreading old ground. Despite its superhuman efforts to charm and capture attention, The Light Between Us is pop music at its most bland and beige.