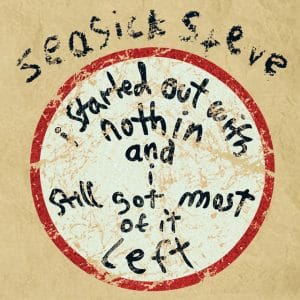 If you don’t know who Seasick Steve is, you’re now in a minority. With a year spent playing pretty much every single festival under the sun, it’s fair to say the world has gone hobo crazy. Hell, in less than a week he plays to 5,500 people in the Royal Albert Hall – and if that doesn’t get dear ol’ Queen Vicky revolving in her tomb, nothing will.

But I Started Out With Nothing… leaves you a little cold. Cliched crutch of the hopelessly predictable it may be, but listening to this album just isn’t the same as watching the bearded wonder give it some on stage.

In fact, there’s something vaguely uncomfortable sounding about it. It is, literally, the sound of a bunch of executives (this is the first SSS album on a major label) throwing a dungareed, formerly homeless man with a penchant for playing instruments self-described as ‘pieces of shit’ into a fancy studio, and wondering why what comes out the other side feels a bit wrong.

The opening title track is as crystalline as a, well, crystal. Steve sounding like they’ve shaved him, bathed him, placed him in a suit and then spent three months Pro-Tooling the gravel from his voice. Then, just when you’re done reeling from that shock, a phalanx of backing singers is parachuted in from readying this year’s X Factor winner’s Christmas single and the whole thing gets really weird.

Christ, they’ll be asking him to play guitars with six strings next. But as hard as they try, no amount of major money tomfoolery could totally cripple this dog-house bluesman. The sheer down-and-out charm of St Louis Slim – complete with explanatory section at the beginning (who knew ‘choke picker’ could be an artichoke picker? Who knew artichoke picking was a full time job?), and the rollicking, sweeet-liiitle Thunderbird set things a lot more straight.

See, when they leave him alone, they strikes gold: Just Like A King invites Nick Cave over to swig bourbon on the porch and the resultant track is a delightful strum-along between two troubadours who’ve probably seen quite a bit. Meanwhile Chiggers offers some hilariously fine advice over what to do if you ever get attacked by a mass of evil sounding bugs (the chiggers of the title).

If you relax into it, and not expect the same experience as seeing Steve live, it’s pretty good. Honestly, you’d have to have a heart of graphite to dislike an album where one of the songs is about his recently deceased dog. Man’s best friend passing away, leaving the owner all alone in a world of hurt; it’s enough to make you track out to Clarksdale and set up an everything must go soul emporium at the crossroads.