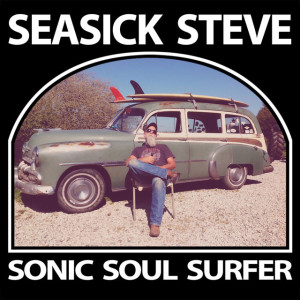 Long of beard, bottle of Jack in hand and with his ever-present selection of self-constructed personalised instruments, Seasick Steve seems to have been in our lives forever. Yet his big break, filling the ‘here’s a quirky acoustic act’ slot on Later… With Jools Holland that did so much for KT Tunstall, didn’t come until 2006. Since then, the septuagenarian with the much heralded backstory as a travelling hobo has been a reliable crowd-pleaser on the festival circuit with his brand of gnarly blues music.

‘Reliable’ is a good description of what to expect from Steve Wold’s seventh studio album. In fact, if you’ve ever heard a Seasick Steve record before, you’ll know exactly what’s contained on Sonic Soul Surfer: long blues jams with plenty of guitar pyrotechnics, all about life on the road, how much fun it is on stage, and the occasional mention of a dog (and, in this case, a barracuda fish).

Which is fine, of course. Wold has built up an audience over the last decade or so by being extremely good at this sort of thing, and asking him to change at this stage of his career is like asking a load of rock fans to not get upset when a hip-hop act is announced as a headliner for Glastonbury. And, it has to be said, when Seasick Steve lets rip on his guitar, paired with his trusty collaborator on drums Dan Magnusson, the results can be thrilling.

Opening track Roy’s Gang, for instance, is a very good example of what Seasick Steve does at his best – it’s long (over six minutes), but never overstays its welcome, and is basically an excuse to hear Steve pick off several exhilarating riffs and play with effects pedals. There’s not really much more to it than that – lyrically, it’s just about how good it is to play live shows with a constant refrain of “we’re going to get on that stage and play you a really good show”. In other hands, it would be banal; here, it’s oddly charming.

The (near) title track, Sonic Soul Boogie, pulls a similar trick, but with even more energy and pizzazz. It builds up expertly until the music seems to threaten to explode out of the speakers – it’s also astonishing how fierce Wold’s guitar playing sounds, considering it’s the same old trusty three-string he’s been dragging around for some years now. It’s all very ‘dad rock’ of course (or, more accurately, ‘grandad rock’) but that doesn’t detract from how much fun it all sounds.

Yet, at over an hour long, it would be nice to hear some variety in the tracks. There are two modes for Seasick Steve – the heads-down boogie, and the lovelorn ballads, and the former is a lot more entertaining than the latter, even if they do all sound quite similar after a while. The country-tinged In Peaceful Dreams is a bit of a dirge, and the sparse We Be Moving and Your Name both seem to drag on forever, making it a bit of a protracted end to the album. Only really Right On Time hits the spot when it comes to the slower tracks, a lovely breeze of a song about a long-lost lover.

Generally, Sonic Soul Surfer does exactly what it says on the tin – it will delight Steve’s many fans, while probably sailing inoffensively past everyone else. And if it’s not especially the place to come to look for surprises, it’s still heartening to see that, at an age when most people have happily settled into their Saga Magazine subscription, this sonic surfer has still got the blues.