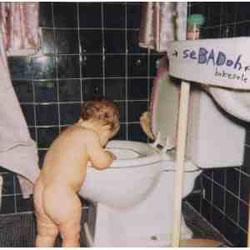 The ongoing Sebadoh expanded reissue series has now reached the group’s significant turning point. The quirky, unpredictable Eric Gaffney, previously one of the group’s major compositional voices, had now departed, and the group was reduced to a trio of Lou Barlow, Jason Loewenstein and drummer Bob Fay. Bakesale is arguably the most successful exploration of the fascinating dialectic between the songwriting styles of Barlow and Loewenstein. Although the group’s subsequent albums (Harmacy and The Sebadoh) were always enjoyable, there’s a strong case for Bakesale being their strongest, most consistent work, even if it doesn’t quite have the hallowed indie cultural cache of Sebadoh III or Rocking The Forest.

Much has been written about Lou Barlow’s lo-fi songs of love and heartbreak (he remains something of the eternal teenager), much less so about Loewenstein’s turbulent, sometimes furious moments. Yet Bakesale was not just the moment that he came into bloom as a songwriter – it also perhaps marked his premature creative peak. Songs like Got It, Soup and, especially, Careful, are as vital in the Sebadoh catalogue as anything Barlow has written. Whereas Eric Gaffney could be frustratingly obtuse, Loewenstein was aggressive, direct and untamed in his delivery. His songs here have the unmediated raw energy of punk, but with a much rarer melodic skill. His vocals are impressive throughout and Careful remains one of the key songs of this era of American indie.

Barlow here is full of his usual mix of resentment, longing, self-loathing and uncertainty. Yet his occasional lapses into earnestness and sentimentality that became more pronounced on Harmacy are mercifully absent here. The clenched frustration of Magnet’s Coil contrasts with the majestic, immersive brilliance of the closer Together or Alone. His painfully honest confessionals, perhaps best represented here by Not A Friend, paved the way for artists such as Elliott Smith.

Typically under-produced, Bakesale is not necessarily the easiest of listens, particularly on headphones or in mp3 format. The bass is usually as distorted as the guitars, and the balance favours the high-end. The guitar, right from the opening riff of Licence To Confuse, is lacerating. Yet it has a rawness and urgency that is utterly compelling. It really sounds like a band rehearsing in a garage. Yet this is a band that is at last in complete command of its materials, delivering well crafted songs with conviction.

It’s perhaps a result of Barlow’s stubborn adherence to the lo-fi aesthetic that Bakesale never quite got the attention it deserved (or perhaps it was due to its spectacularly unpleasant cover image of a naked baby peering into a toilet bowl). Yet the apparent amateurishness of the approach disguised some exceptional and arguably even ambitious songwriting. There’s a wonderful narrative shape to Not A Friend – so much so that the song’s final flourish, although desperately sad, sounds somehow euphoric. Rebound is one of Barlow’s most immediate and memorable blasts of power-pop, whilst Dreams is among his strangest statements.

Yet Bakesale is the one Sebadoh album where the contrasting styles and constant shifts seem to serve an over-arching, coherent purpose. Perhaps this is simply because the group’s quality control is more rigorous, but it also seems as if the songs fall into neat clusters. Lowenstein’s angry, sardonic Not Too Amused brilliantly complements Barlow’s Not A Friend. The same goes for Got It and Skull. Dreams, Mystery Man and Together Or Alone all seem to reflect a similarly broader, more expansive approach to songwriting whilst Rebound, Give Up, License To Confuse and Careful are all insistent, strident bursts of energy. Of its kind, Bakesale is a classic, and well worth reappraising.