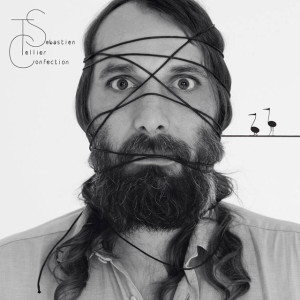 There’s an oddly comforting feel to Confection, French electro-pop guru Sébastien Tellier‘s fifth studio album. It’s warm, welcoming and gorgeously atmospheric – close your eyes and you can almost imagine wandering down the Champs-Élysées with this as your soundtrack.

Yet the sheer familiarity of much of this album is also to his disadvantage. For Sébastien Tellier is, of course, responsible for one of the most beautiful pieces of music ever written, La Ritournelle. And that seven and a half minute masterpiece has pretty much defined Tellier’s career since its release in 2004 – rather unfairly damning any future compositions to a comparison that’s bound to not quite measure up.

The comparison to La Ritournelle, as foolhardy as it is, is pretty inescapable because much of Confection sounds like a distant cousin of that song. Most of the album’s 14 tracks are instrumental, with only L’amour naissant featuring Tellier’s vocals, and it often seems like a soundtrack to a mysterious film yet to be made. (In fact it owes its gestation to a film soundtrack commission which did not come to fruition.)

The aforementioned L’amour naissant is the biggest throwback to La Ritournelle and is a recurring motif throughout Confection, appearing no less than three times. Each track featuring Tellier’s trademark mix of sighing strings, sad piano chords and skittery percussion courtesy of regular Tellier collaborator, the legendary Nigerian drummer Tony Allen. Tellier’s voice is so doleful and so affecting that it’s a shame we don’t hear much more of it during Confection.

There are no real hooks to be found, as this is mostly a collection of breezily atmospheric instrumentals. Adieu comme un jeu has a classical sensibility to its austere arrangement, as do the minute or so long interludes of Curiosa and Curiosa II, but it leaves you yearning for something with a bit of meat to it. For while much of Confection is nice background music to be swept away in, there’s ultimately something missing, and because many of the tracks feel rather similar, there’s a tendency for everything to blend together and sound a bit homogenous.

Due to the short duration of many of these tracks, it all feels a bit lightweight and insubstantial. What’s more, the grating Waltz disastrously interrupts the languid flow of the album, appearing as it does halfway through proceedings – it means that, as you’re slowly settling into some deliciously mournful moods, along comes the noise of a fairground ride to distract you.

There’s much to admire about Confection, but it’s frustrating too; we know that Tellier is capable of so much more. For, while much of this album is beautiful to listen to, there’s also the sense that Tellier’s treading water slightly, trying to recreate those former glories that shone so brightly.