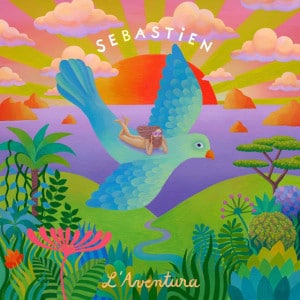 France’s most invigorating sonic auteur, Sébastien Tellier, has a work rate to make many an artist jealous. His taut ethic means that although he only released a record last year – Confection – he’s ready to drop another doozy. It’s impressive that’s released three LPs in as many years.

The Parisian has won over hearts across the globe for his profoundly affecting electronica, Serge Gainsbourg-esque Franco-pop and cinematic compositions. He may have never really found the commercial success of his contemporaries, despite being France’s candidate for the Eurovision Song Contest a few years back, but that’s not stopped him being an unsung cult hero, festooned with plaudits. And no matter which way you look at it, the Tony Allen-featuring La Ritournelle is an anthem for a generation (and also celebrates its 10th birthday this year).

For his new full-length, entitled L’Aventura (a mis-spelling of ‘The Adventure’ in Italian), we see Tellier trot across the globe for a well-rounded collection of pop ditties. It’s not unusual to have an ambitious concept from Tellier and, apparently, “the album is supposed to be a musical reimagining of his childhood, a fantasy inspired by the sights of sounds of Brazil rather than the reality of his French home”.

Fans of Tellier’s previous efforts will swoon at the cornucopia on display on L’Aventura. His mingling of Brazilian flavours, like Bossa Nova, with the noises of ’60s France provides an intriguing concoction that would surely appeal to the lovelorn quirk of either Woody Allen or Wes Anderson; it’s an incredibly vivid, visual anthology, conjuring visions of lush undergrowth, verdant tangled vines and the dishevelled, patchwork beauty of crumbling streets. Tellier’s track Love, for example, is a steamy bout of tropical elegance, avec coarse funk bass, flute majesty and fluttering guitars. It’s distinctly Tellier, that’s for sure, but any diehard fanatic will be in thrall to the experimental adventures undertaken by the Hagrid-maned Parisian.

Ma Calypso invokes the boogie. It’s like a weirdly anachronistic Bond theme, wielding equal measures of futuristic electro-ooze and serene Latin beach-pop. The flute-chirrup peppered Ricky L’Adolescent (a song about Tellier meeting his teenage self and being disgusted) is dark, shadowy gothtronica with melodramatic flourishes and baroque spasms. A different timbre to much of the record, but one that’s very welcome – no one can survive on eternal pep. It’s maybe not as easy as Tellier would wish to decipher the themes and meanings, largely due to the complex tri-lingual language barrier, but that doesn’t stop this record being great, inventive pop.

Churning out a record a year must be starting to take its toll on Tellier. Faint cracks are beginning to show – to adhere to his core tenets, L’Aventura needs to be more cohesive and stringently controlled – but there’s no quaking ruptures that signify Tellier needs to halt. Perhaps he just needs a bit more focus. However, though his aims of presenting this as a robust, high-concept album aren’t necessarily met, this is still wonderful pop. It’s not Tellier’s finest work, but it could still take on the Top 40 mano-a-mano despite that – surely testament to the ridiculously high bar by which we measure Tellier’s efforts, and his ceaseless top-notch calibre.