Selena Gomez & The Scene – When The Sun Goes Down 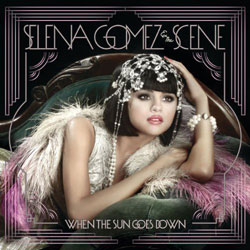 As one of the many Disney Channel teenage stars who have gone on to successful music careers, 18-year-old Selena Gomez, known in the gossip rags for appearing on Justin Bieber‘s arm much to the chagrin of the Beliebers, follows the trend down to a tee, following up two gold certified albums with a third which will no doubt win the hearts of preteens everywhere while driving their parents up the wall.

When The Sun Goes Down opens with the highly irritating Love You Like A Love Song, which comes off sounding like a Lady Gaga b-side, followed by the forgettable Bang Bang Bang. Two wannabe electro-pop songs which lack both lyrical merit and a really catchy hook to make up for it.

Who Says, however, is an enjoyable uplifting and more straightforward pop track that allows Gomez to have some kind of convincing connection to the lyrics. These follow a perhaps rather obvious teen pop lyric of self belief and being good enough after all. It’s almost guaranteed to be heard playing over the credits of a chick flick at some point this year.

We Own The Night, which follows, is a pretty decent pop track. Penned by Pixie Lott, the track sounds remarkably sombre in comparison to its bubblegum lyrics, but this only works to strengthen it and make it just a little more sufferable for the unfortunate parents forced to play the album on long car journeys.

Fifth track Hit The Lights could be a massive club hit, yet in the surroundings of the rest of the album it doesn’t make sense. There’s something very off the mark lyrically about an 18 year old Disney star portraying herself as a clubbing veteran to her primary audience: the younger generation.

Whiplash is a perfect example of Britney Spears‘ writing, sounding almost like something from her Circus album, only not as good. It instantly evokes Womanizer. It’s one of the best uptempo tracks in the album, only brought down by the horrendous rap sections. Selena Gomez should never be allowed to rap again, especially if she’s going to break into a horrific Queen’s English accent midway through.

The title track is rather offensively dull, and will most likely be skipped even by diehard kiddie fans. This beige nothingness is followed up by the absurdly autotuned My Dilemma which would make even Kanye West cringe on hearing the clumsiness of the effect. Elsewhere, Katy Perry’s contribution, That’s More Like It, features not only the catchiest melody but also the most outrageously awful lyrics of the entire album.

Outlaw and Middle Of Nowhere both return to the Lady Gaga cast off sound of the earlier tracks, though the latter is definitely the stand out of the two. Outlaw is like what Gaga would sound like if she was boring. The album wraps up with the brain melting atrocity of Who Says in Spanish, a totally unnecessary and uncomfortable inclusion.

The biggest problem with this album is that it is a relief when it finishes, which is never a positive thing. Although When The Sun Goes Down was never going to earn any prizes for its brilliance, it could certainly be miles better considering the writers and producers who worked on it. The sad thing is, Gomez has one of the most pleasant and distinctive voices of her Disney cohorts, but she’s let down by an album of weak songs that try too hard to be family friendly. Back to the drawing board for this cartoon pop star.