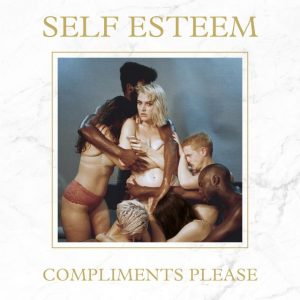 There’s a line early on in Compliments Please that could be easily missed, a snatch of dialogue in an introductory 30-second opening track: “When you’re in a band, everybody really doesn’t want the same thing you want, and so you keep on doing the same old thing… other people like doing that but you’re trying to go up… further.”

It’s probably the key line of the whole album as it’s how Self Esteem came into being. The brainchild of Rebecca Taylor, formerly part of Sheffield indie duo Slow Club, her solo project is a 180-degree turn from anything she’s produced before. Which is, of course, the whole point of going solo.

Taylor has spoken before of her love of big, bright, intelligent pop music and how she felt that her former band could have been holding her back in creating that sort of music. So there’s a sense of catharsis listening to Compliments Please, an album full of pop bangers that manage to be ambitious, fun, infectiously danceable and, at times, bruisingly self-lacerating.

Recent single The Best gives a good idea of what to expect – its sentiments of a woman breaking free to forge her own path could be as easily addressed to former bandmates as it could be an ex-lover. It’s one of those songs you feel like you can’t stop listening to, a song that if you’re not immediately dancing to as its beasts kick in, then you could well have feet made from concrete.

Later on in the album, Rollout performs a similar trick: contagiously upbeat and poppy while spilling Taylor’s emotions all over the place. It’s a break-up song full of regret and longing, with Taylor musing on “what I might have achieved, if I wasn’t trying to please?”. But again, the first impulse is to dance along with the heartache.

Compliments Please is full of unusual, inventive arrangements that Taylor has put together with producer Johan Karlberg (of Swedish band The Very Best). I’m Shy is a gloriously languid ballad enhanced by a choir of multi-tracked backing vocals and occasional discordant noise, while Girl Crush is a slinky dancefloor filler driven along by percussive handclaps. Now and again, the odd curveball is thrown too such as the extended guitar solo at the close of She Reigns, or the auto-tuned 808s & Heartbreak-era Kanye West homage of In Time.

Despite the auto-tune and pitch shift on some tracks, Taylor’s voice remains incredibly impressive. Those who have seen Slow Club live know what an imposing vocalist she can be, and it’s demonstrated best here on Steady I Stand, a gloriously atmospheric ballad which surveys the debris of a broken relationship but still remains uplifting, mainly due to Taylor’s impassioned vocals.

Even at 16 tracks (including the little spoken word interludes that scatter the album), it never seems too long or self-indulgent, and Taylor’s not afraid to take risks either: see closing track On The Edge Of Another One which sees her voice pitch shifted so androgynously that she sounds like a grizzled blues singer. “You don’t know me but how could you, you don’t like me and why would you” she sings, before the tape suddenly runs dry.

In the recent film Our Most Brilliant Friends, which documents what turned out to be Slow Club’s final tour, Taylor bemoaned the fact that, while her own band seemed to stay on a particular level, her contemporaries were filling ever bigger venues and receiving award nominations. With Self Esteem, Taylor may well have found the vehicle that can deliver on that ambition.

Self Esteem MP3s or CDs

Self Esteem on Spotify

More on Self Esteem
Self Esteem – Compliments Please