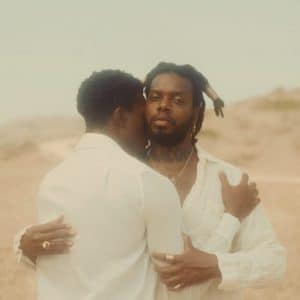 Tenderly embracing his lover in matching white shirts on a sun dappled beach, the cover of serpentwithfeet’s new album teases both a form of artistic rebirth and emotional wedlock for the Los Angeles based musician. Choosing to drop his birth name and be known purely as serpent, the former Baltimore troubadour is vibrantly fixing a new identity for himself with the songs that make up DEACON and it is a joyous one that casts a rosy glow.

The palette of nervous indulgences that characterised his debut Soil and those early ritualistic live shows carries no weight here. Adorned with fresh confidence, and sustained by the love that’s being provided by his partner and the queer community, the scents and colours he conjures with his voice are filled with trembling potency.

His vulnerability is still perceptible on the eccentric acoustics that ripple through opener Hyacinth, but the luminosity and insight that companionship has provided him extends to the song’s gleaming chorus, a radiant statement of internal resolve in the face of historical conflict. As the track slowly withdraws, his dedication to his craft and his family is tangible. The softly jubilant chorus of Same Size Shoe infers gratitude at finding a soul mate that matches him not only physically but also emotionally.

Malik, one of the three bittersweet tracks on the record where serpent expresses admiration to the invented conquests of which he furtively daydreams, alongside Amir and Derrick’s Beard, blooms with gospel handclaps, economic glimmers of piano and densely clustered harmonies. The espousal of self-interrogation continues as the lyric “Blessed is the man who gambles / blessed is the man who wears socks with his sandals” attests, serpent acutely sermonising for tolerance and compassion. Coiled within the pensive R&B that makes up Amir serpent throws question after question to his suitor, mapping the boundaries of new found intimacy, his inquisitive cadences painting the singer as a flirtatious prize to be snatched up.

London songwriter Nao guests on the painterly Heart Storm, spiked with analogies of the affirmative impact a deluge of platonic sweetness will have on the soul. Her participation eradicates any suggestion of artistic isolation that lingered, but it’s the description of collective affirmation on Fellowship where the album gets its greatest strength. Co written with Sampha and Lil Silva, and alluding to the creative associations he’s nurtured with people like Björk and Ty Dolla $ign, serpent quiets the grumble of loneliness that had once been his signature.

The sensually fierce temperament of performers such as Whitney Houston and Brandy informed the making of these songs, and coming from a similar background, the commodification of a more traditional song structure reveals how dramatically clear and persuasive serpent’s voice remains. Obliterating the angular consumptions that threatened to confine him as a musician, by recapturing the pleasure of his strictly religious adolescence and finding strength in the playful streak that courses in his veins, serpent has crafted a spatially attentive album centred around representation and reverence, inclusivity and acceptance.