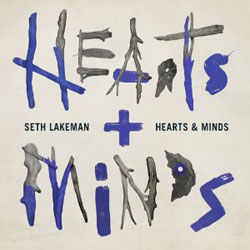 Seth Lakeman is a bit like the Wayne Rooney of Brit-folk. The golden boy who paid his dues, slogged his guts out, was lavished with praise but, when it really mattered, left us all feeling a bit underwhelmed.

He might not have been competing in the fiddling world cup, but this, his fourth solo album, was the moment he’d been working up to; his chance to silence the critics and prove he was worthy of his folk prince crown. His previous effort, the fabulous Poor Man’s Heaven, released two years ago almost to the day, reached Number 8 in the album chart. The album before that, the gorgeous Kitty Jay, was nominated for the 2005 Mercury Prize. And while he might attract hoards of swooning, patchwork trouser wearing fans at the Cambridge Folk Festival, he’s yet to shed his cult status.

He flies straight into the task in hand with the album’s opener and title track, Hearts And Minds. A foot stomping, whiskey-addled violin-along, it’s a more aggressive sound than we’ve come to associate him with. It’s a rocky air-puncher, a modern day protest song pouring scorn on the bankers and politicians – or “fools from the public schools” – who have dragged us down with them. “Down our tools, don’t give a damn for washed up fools… stand together to survive with strong hearts and minds,” he sings.

Likewise, Preacher’s Ghost uses rough-hewn melodies to tell of struggles, hard work and broken hearts; stories that paint scenes from the lush, rolling landscapes of his native Devon. But sadly that’s where the magic ends.

Producer Tchad Blake, known for his knob twiddling with the likes of Tom Waits and Crowded House, has stamped his mark on Lakeman’s previously subtle, traditional percussive stomp, and seems to have a bigger, stadium sound in mind. With the full-on production and Lakeman’s Americanised inflections, parts of the album, most noticeably The Watchman, veers towards the tassle-twirling, cowboy boot wearing that fills US baseball stadiums.

Other songs are just dull and a little too safe; Hard Working Man and The Circle Grows are straight from the folk A-Z, and sound almost like a bad impersonation of some of his earlier work.

The album redeems itself slightly with Tender Traveller, a return to one of his core themes – running away, fighting back. Which is the great irony of Hearts And Minds – the foundations for a really great album were laid, ready and waiting, and he played a key part in helping to establish the nu-folk scene that’s taken off over the past few years. But, while his political aggression might be at its peak, with Hearts And Minds he’s taken a step back. Sometimes less is more, as has been proven by the brilliant recent releases from the likes of Mumford And Sons and Laura Marling, and this time Lakeman’s lost the fight.