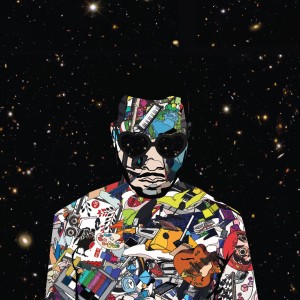 Houston, Texas native, Californian resident producer, DJ and singer Seven Davis Jr is a man who seemingly can do it all. From a diverse musical background of influences ranging from gospel to jazz via early loves of Burt Bacharach and Frank Sinatra the producer discovered the euphoric ecstasy of dance music as something of a musical epiphany. Forging a connection with early house music’s ethos of positivity, Davis Jr creates his own music within a similar blissed out hope, using his music to espouse a message of freedom of expression, creativity and the power of soul and spirit.

Davis Jr’s debut album Universes is a record that combines all of his musical passions with a desire to spread ‘good vibes’ as one of the album’s effervescent track titles details. Rooted in dance music’s deep soul of funk grooves and hooks, Universes takes that template and imbues it with Davis Jr’s own personality. The record displays a surprising but pleasing amount of wit and personality for ostensibly a party album. There is a great deal of hidden depth here that rewards repeated listens. On cuts like the joyous, frantic funk bounce of Too Cool For School, Davis Jr cheekily rebukes the staid and cynical dance floor pessimists, singing in a supremely cool and assured Prince like falsetto: “Mr DJ, don’t play this in the club, cause people don’t dance no more, everybody too cool for school.”

The focus at the heart of Universes is the transcendence of music and the power of the groove. This results in an undeniably brilliant stretch of dance floor bangers that form the core of the record. House producer du jour Julio Bashmore lends a hand on the funked up party jam of Good Vibes while Sunday Morning’s rolling, insistent grooves and repeated vocals is wonderfully insistent and hypnotic.

As the album progresses Davis Jr’s skill and dexterity as a musician becomes ever more apparent as he dives into more emotional and personal territory. Accompanying the introspective lyrics focusing on his struggle to overcome addiction, the music takes on a hazier and experimental hue. Fighters is a wonderful piece of Flying Lotus like sonic, gospel soul while Afterlife is dreamy and luscious soul. Closing track Welcome Back is even stranger as a computerised voice asks tells Davis Jr it’s time to return to space, painting him as some sort of otherworldly musical saviour. While the music he creates on Universes is not quite from another planet, there’s definitely a spirit of exploration that makes it a joyous listen throughout.