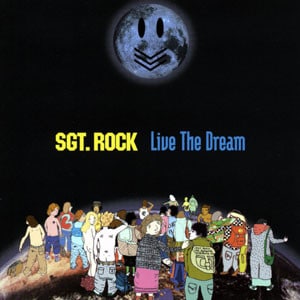 ‘Tis the season for some debuts, being summer, despite what London’s weather system seems to think. So here’s the debut album from Sgt. Rock, a chap from Tooting who should know that his “sunshine-kissed vocals” are only going to make everyone in Tooting jealous.

Without wishing to be overly unkind to residents of Tooting, it is not the most inspiring place in the universe, but The Sargeant/Sergeant/Sgt/whatever has produced an album that makes us all think we’re on some Ballearic beach and on something we really shouldn’t be without water in copious quantities with which to wash it down.

This is not a thumping trance anthems collection; more of a sedate affair that should be played as the sun rises and everyone is thinking they’ve not got the energy for anything other than sleeping – it might just keep them going. The opening track, ‘Supadickie’, is really a winding-downer, but later tracks such as current single ‘We’re In Heaven’ and ‘Yeah World Party’ get the tempo just fast enough to keep you in the mood and just slow enough to let you keep up when your system is telling you not to.

It is an album of beeps, effects, wahs and bloops, a collection of tailored dance tracks that won’t have Paul Van Dyk quaking in his boots but should at least cause some interest. Norman Cook (ooops, I mean Fatboy Slim) loved the final track, ‘Deeper ‘n’ Deffer’, and if you can get over a track entitled ‘So Many Reggie Perrins In The Arse End Of Space’ then this album should be allowed to jump into your shopping basket.