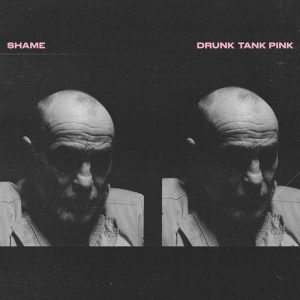 Having lived through, and at times contributed to, a time when the use of ‘angular’ to describe music hit saturation point, thinking of applying it now does cause a certain gag reflex to be invoked. And yet, it is hard to get past angular as a singular noun for assigning to Shame‘s second album Drunk Tank Pink. It is angular. It is full of angles. Vicious sharp riffs that sharply sear. Guitars that wind tightly around themselves. Wire. Talking Heads. Post Punk. Angles.

It gives the album an intense sense of urgency. Not the urgency of having somewhere to be or something to do, but the anxious need that comes with not having anywhere to be or anything to do. But feeling like you really should. The impotent energy of the trapped. The imprisoned angst of those without agency.

The angles give some thrilling moments. Alphabet is a splenetic splat of an opening, chugging along on a riff that. Just. Won’t Stop. Jerking. The trebly guitar teams to a skanking rhythm to anthemic affect in March Day, while the sub two-minute Great Dog is the band throwing themselves headfirst at the target marked spittle-flecked punk and hitting it square on.

To be fair, Shame may have had some of those angles before. They may have shown them on their first album. Drunk Tank Pink definitely carries the same wit and sense of humour and, in front man Charlie Steen, they have someone whose charisma is transmitted as well on record as it is live. But there’s just more other stuff here than there was in the debut.

The dark brooding chug of the bass ominously propelling Snow Day. The way Born In Luton starts with the same sense of perpetual motion seen elsewhere until, unexpectedly, the band pick a point, plant their feet and build something less wiry and more mah-ossive. The drums become martial, the backing vocals become macabre chants and Steen’s rasp becomes at least two Strepsils deep.

Or Human, For A Minute, which could be Sweet Harmony by The Beloved, had that song been taken via the back door into the back room of a back street boozer and taught a few harsh lessons about de-gentrification. It’s a deliberate, heavy-lidded moment of introspection that is entirely wonderful. And as Steen muses “I don’t deserve to feel human for an hour / or even for a minute”, all you want to do is offer him a cup of soup, a hug and tell him we all feel a bit like this sometimes.

In spite of all that’s going on, the ground that Shame manage to cover, it all hangs together brilliantly. Drunk Tank Pink is a great album, from whatever angle you look at it.