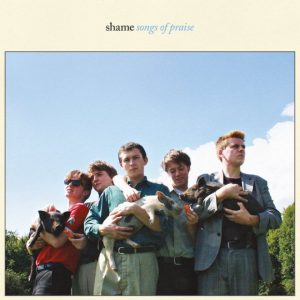 It’s a sign of influence and intent when the debut album from London youngsters Shame could be described by album titles by The Fall. Cerebral Caustic? Check. Bend Sinister? Check. Middle Class Revolt? Check, check, check!

Harnessing the spoken/sung stylings of Mark E Smith suits Charlie Steen’s vocals perfectly, as they dredge through the detritus of modern living, smearing the dirt from the rubbish and waving it as a flag of warning against complacency.

Complemented perfectly by Sean Coyle-Smith (guitar), Eddie Green (guitar), Charlie Forbes (drums) and Josh Finerty (bass), the Shame experience is like a sonic juggernaut thundering towards the listener, with precision, melody and incendiary intent. Sharing a practice space with Fat White Family, touring with Slaves and taking the time to figure themselves out helped Shame hone the creation of the visceral and concise songs on Songs Of Praise. This London-based band have the classic ‘outsider gang’ feel to them that shows in their influences. There’s the dissonant guitar chimes of Echo & The Bunnymen, politico shouts of Manic Street Preachers and the clang and clamour of The Birthday Party, but with enough brio and vigour to make their own mark.

Dust On Trial begins a relentless arpeggiated climb up a helter skelter of whirlwind guitars and whispering, screaming vocals which urge “just one step closer to me” before coming to a shuddering halt. Concrete doesn’t let up the pace and is “about someone who’s trapped in a relationship and they’re being pummeled into surrender,” according to Steen, its call-and-response vocals swinging between self-doubt and assurance. (Check out The Visa Vulture – sadly not included here – a gently acidic attack on Theresa May’s stance on immigration set to a gentle jazzy air and described by Steen as “the worst love song ever” for where they stand.) The Lick highlights Steen’s love of the acerbic lyric and revels in the fetid stench dripping through enunciation of his chosen words, mocking modern consumerism and relishing the repetition of the phrase “relatable not debatable”.

One Rizla is about embracing insecurities, something which Steen had to do when playing live – getting right into the crowd. By comparison it’s a sun-drenched melodic tune harbouring a tale of self-loathing and independence. Tasteless exhibits Shame’s latent pop sensibilities in a tightly wound rallying cry against creeping conformity. Expressed in the repeated line, “I like you better when you’re not around”. “It is looking at what effect indifference can have on a person and if you’re willing to move forward or if you’re stuck on certain smaller issues,” explains Steen.

The standout track from their incendiary live shows, Gold Hole builds and drops the tension and is the most musically ambitious. “It’s the debate about the difference between exploitation and empowerment,” says Steen, “looking at sexual labour through a stereotypical tabloid perspective.” It’s run close by Angie, an epic and ambitious track building from a three-note intro into something majestic that hints at a future full of diversity and vitality. Sunshine and shadows vie for attention as the musical spring is relaxed to allow some space into the tight little world of Songs Of Praise. Steen calls it “a dark love story” where “a guy is in love with this girl at a young age and she kills herself but he’s still feeling so much love towards her”.

Songs Of Praise distils the best features of classic British alternative music into a vital band passionate to enervate, communicate and entertain. As Sheen says their desire is to create “something that is ongoing and developing… that is honest in a lot of ways.” Shame are the band you’ve been waiting for.