Sharon Jones & The Dap Kings – Give The People What They Want 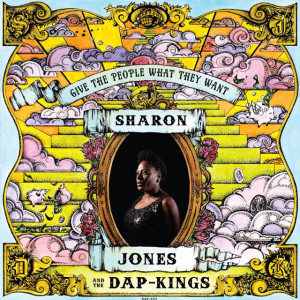 While Sharon Jones & The Dap Kings are populists who want to entertain and are quite impossible to dislike, their refreshingly contemporary take on an old genre has resulted in some of the best soul-revival albums of the past few years, especially 2010’s I Learned the Hard Way and 2011’s excellent b-sides compilation Soul Time! So in 2014, to name an album Give The People What They Want perhaps comes across as a bit pop-starry.

But in the case of Jones and her tight band, it instead shows off her instrumental chops and makes a statement that, in her genre, right now she’s the best in the game. Indeed, Jones’ last official release ended with a cover of Shuggie Otis’ untouchable Inspiration Information (a cover that first saw the light of day on 2009’s Dessner Brothers Dark Was The Night compilation). This time out, Jones starts right where she left off: honouring the past while redefining the present. No, literally; the first track on the album is called Retreat!

Give The People What They Want wears its influences proudly. Jones’ Aretha Franklin scream and Mavis Staples rasp take turns at being equally stunning, while The Dap Kings are as inventive as ever. Even the whooshy sirens at the beginning of the confident, driving Stranger To My Happiness is a minor effect that, when surfacing again throughout the song, adds to the delightfully retro-futurist aesthetic of the song, rendering the track a surefire candidate for a sample if J Dilla was still alive. Meanwhile, great third track We Get Along, a tale of an abandoned child, is the quintessential Otis Redding-inspired soul song that instructs its audience to find hope in hard times. And the horn-laden funk strut You’ll Be Lonely has a back-seat backing beat that gives Jones ample opportunity to belt and blow listeners away with the sheer power of her voice.

Indeed, to listen to Give the People What They Want from start to finish without contextual research still reveals its high quality, but it’s difficult not to listen to the album, one that was originally slated for 2013 release and delayed because of Jones’ bout with bile duct cancer (she has successfully beaten those particular odds), in its proper context. Whether artistic intention or not, many will undoubtedly listen to this record and have fun but also be thankful for Jones and the Dap Kings’ energy and livelihood, remaining thankful that the music world has someone like her around.

Of course there’s the fun, comparatively trite songs like Making Up and Breaking Up (and Making Up and Breaking Up Over Again), but the most affecting songs on this album are We Get Along and especially the penultimate track People Don’t Get What They Deserve. While the latter song mostly concentrates on income inequality and debunking the ridiculous notion that people always earn what they receive, the message works in context of Jones’ health problems, too. As strong as she is, her recent battle underlines that Jones is only human and, as such, does not control her own destiny.

But her backup singers and backup band, providing a hectic, staccato chant of the song’s title and frantic horn arrangements respectively, act as Jones’ safety net. On the track, admitting her lack of control over her own fate is the first step towards coming to terms with the truths of life. By the end of the song, she conquers them by singing and shouting them down. It’s an inspiring moment on a great album full of songs both uplifting and danceable, emotional and cerebral. And, really, what more could the people want than that?