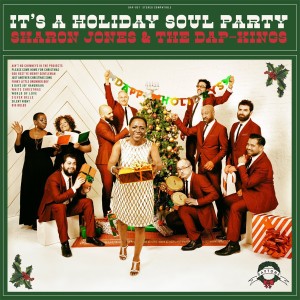 Were someone to do the maths, it’s likely that Christmas albums would emerge with the highest cost-per-listen of any musical genre – higher, even, than the solo output of Richard Ashcroft.

It’s A Holiday Soul Party, the festive offering by the classicist R&B act Sharon Jones & The Dap-Kings, could well have a longer shelf life than most Christmas records. For a start, Jones and her band are redoubtable musicians who are unlikely ever to put out an average record, let alone a bad one. Better still, the 11 tracks here (five originals, six covers) find Jones and her band stamping their authority on the music and refusing to succumb to the clichés of the genre. (Sleigh bells are conspicuous by their absence.)

That said, the cover versions are drawn straight from the mainstream Christmas canon. Fortunately, Jones and Co find plenty of ways to refresh even the most ubiquitous festive numbers. In their hands, Bing Crosby’s plodding White Christmas becomes, frankly, a banger played at roughly three times the original’s speed. Silent Night is transformed into a sultry slow jam that suggests that the night before Christmas would be the perfect time to have sex.

Funky Little Drummer Boy bears a title of Ronseal-worthy accuracy, sounding as it does like the original performed by The Meters. Silver Bells – first performed by Bob Hope in 1950 – is three minutes and 19 seconds of pure joy that will warm the heart of even the most committed Scrooge. God Rest Ye Merry Gents is a fittingly informal instrumental makeover of the traditional English carol. Please Come Home For Christmas – a number covered previously by, among others, Willie Nelson, The Eagles and Jon Bon Jovi – is the straightest reading here and, consequently, the least interesting.

But it’s the five originals that elevate It’s A Holiday Soul Party above the status of a two-listens-maximum curio. Opener 8 Days Of Hanukkah is tremendously exciting and testament to The Dap-Kings’ preternatural tightness. With every number’s announcement, the brass section performs the corresponding quantity of notes; by the time they reach number eight, the effect is deliriously entertaining.

Better still is Ain’t No Chimneys In The Projects, which finds Jones recalling her childhood puzzlement at Santa Claus’s route into her modest home. “When I was a child I used to wonder how Santa put my toys under the tree … mama how can this be / when there ain’t no chimneys in the projects?” The song then becomes a touching homage to the power of her mother’s imagination: “as soon as you’re asleep, a chimney will appear…”, she improvises to the young Sharon. It deserves a place on every Christmas playlist from now until time immemorial.

The other originals are less substantial. Just Another Christmas Song finds Jones reeling off the names of other Christmas songs in the lyrics – “I’m dreaming of a white Christmas, with jingle bells in the sky…”. It’s a fun exercise in meta songwriting but little more. Big Bulbs, however, is a hoot: a long-overdue unleashing of the smutty potential of baubles, to wit: “baby you got them big bulbs flashing in the window tonight”. It sounds – in the best possible way – like something that was bashed out in a rehearsal, chiefly for the band’s own amusement.