Sharon Jones & The Dap Kings – I Learned The Hard Way

by Darren Lee
published: 3 May 2010 in Album Reviews
Tweet 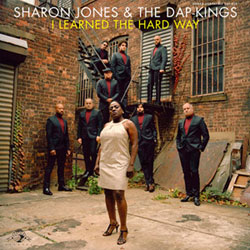 It’s easy to say that they don’t make the likes of Aretha Franklin, Mavis Staples and Tina Turner any more. But the people at Daptone still do, and all hail Sharon Jones, monarch of the Dap Kings, for bringing us another album of immaculate retro soul.

Like their previous albums, I Learned The Hard Way sounds like Philadelphia Soul and Motown catapulted through a wormhole firmly into the 21st century. It harks back to a golden age when discs were LPs and tracks were singles. Derivative and unashamedly retro it may be, but that’s the point; this is pure pop songwriting and performance, led by a powerful central turn from Jones herself. A forgery of ’60s and ’70s soul it may be, but even the most knowledgeable of experts will find it difficult to spot the difference, and if you’re going to fake it then you should copy the best.

The Game Gets Old’s luscious fanfare announces the beginning of the album and immediately sets the tone with its gorgeous, almost melancholic refrain. The title track is a memorable belter and on Better Things To Do we have a killer funk break begging to be sampled.

The global credit crunch bankopalypse is acknowledged in Money, where Jones fires on all cylinders – if the late, great James Brown was still around he’d fare little better. But it’s on Window Shopping that her range shines through, with a deceptively simple break-up song crammed full of soul.

The Dap Kings themselves take centre stage for the instrumental stylings of The Reason. Here the backbone of the album is revealed as Boscoe Mann’s band show why they’re one of the most in-demand funk outfits working today. Having also contributed heavily to Amy Winehouse‘s successes it’s good to see them emerging from the background. Mann should certainly take credit for his production duties by successfully recreating the desired bygone soul vibes for modern audiences.

I Learned The Hard Way is a collection of strong, instantly likeable songs that keep the soul fires burning. The Dap Kings’ strictly defined retro sound means that the formula is likely to stay at this consistent level for some time – if it isn’t broke, then don’t fix it. This fourth album shows Sharon and The Dap Kings at their most polished, funky and soulful. Mrs Jones sure has got a thing goin’ on.