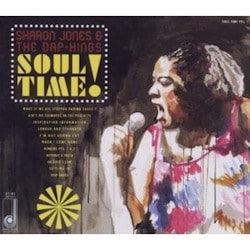 Soul Time!, the fifth album from soul revivalists Sharon Jones & The Dap-Kings, collects tracks that previously only appeared during the group’s famously awe-inspiring live shows, and that should tell you something. What we’ve got here are Sharon Jones, a woman born perhaps a generation late, and the Dap-Kings, led by Boscoe Mann and sought after to back anyone looking to get funky (including the late, great Amy Winehouse), turning in a collection of crowd-pleasers in fine form.

One listen to the opening bars of He Said I Can reveals the soulful power that Jones carries within her. As usual, it’s nearly impossible to distinguish The Dap-Kings from, say, longtime Stax backing bandBooker T And The MGs as far as backing bands go, save for Mann’s flawless, pristine production. Here, as always, they perform exquisitely, locking in tight grooves and allowing the horn players to journey off the map once in a while (as on the tensely groovy I’m Not Gonna Cry; the sharpshooter snare precision accents horn stabs with perfect accuracy while Jones belts it out with her trademark soulfulness).

The trick of time-travel is an interesting one; in some ways, Jones and her Dap-Kings are forerunners for soul songstresses like Winehouse and – to some degree – Adele. But while those artists (and to an even greater extent, Gnarls Barkley) attempt to update the sounds made famous by James Brown, Aretha Franklin, Mavis Staples, and others, and morph them into some sort of iPod-ready 21st century amalgamate, Jones seems content to retread old ground for its own sake (dig spot-on the cover art for this one).

Some have called this approach derivative, and there’s probably some merit to that, but the music is so damn fun, it doesn’t really matter. Genuine (here pronounced genu-wine) is a two-parter in the James Brown Style, and What If We All Stopped Paying Taxes could be accused of pandering to the crowd. And Ain’t No Chimneys In The Projects features sleigh bells and does Christmas much the same way as Brown’s own Santa Claus Go Straight To The Ghetto (complete with a sax solo that opens with a Jingle Bells riff). New Shoes is an Aretha Franklin style empowerment anthem (“I got some new shoes! I said it’s time to move!”), complete with call-and-response shouts from the band.

It could be argued that Soul Time! itself is nothing new within the Dap-Kings catalogue, made up as it is of old tunes (Longer And Stronger, for instance, was written to celebrate Jones’s 50th birthday in 2006), but these favourite oldies are collected here for the first time, and that’s really something. Album closer Inspiration Information (a Shuggie Otis cover) accomplishes something more soulful and genuine than any autotuned, computerised R&B performer working today could even dream of handling; there are no loops and very little in the way of a safety net. Sharon Jones & The Dap-Kings are the real deal, and they’re still exemplary torchbearers even as the soul revival seems to be winding down.

Sharon Jones & The Dap on Spotify